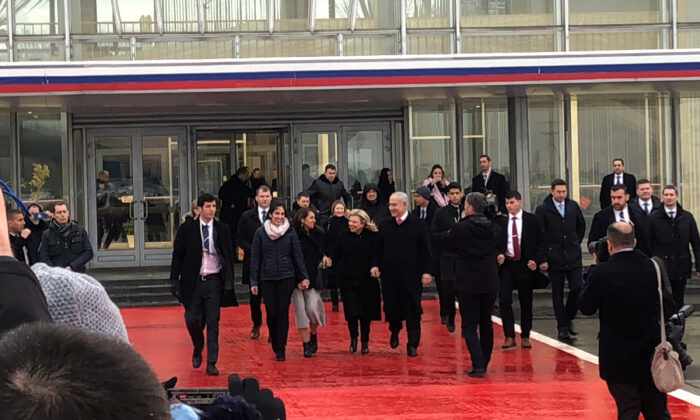 Israeli Prime Minister Benjamin Netanyahu and his wife, Sara, walk with Naama Issachar and her mother, Yaffa, at Vnukovo International Airport in Moscow, Russia, on Jan.30, 2020. (Dan Williams/Reuters)
US News

Russia freed a U.S.-Israeli woman on Jan. 30 who had been jailed on drug charges after President Vladimir Putin granted her a pardon following a high-profile lobbying campaign championed by Israeli Prime Minister Benjamin Netanyahu.

Naama Issachar was released ahead of talks in Moscow between Putin and Netanyahu, who had flown in from Washington to pass on details of a U.S. peace plan for the Middle East.

Netanyahu thanked Putin for what he said was a “swift” decision to pardon Issachar. The prime minister later met Issachar in Moscow. Footage showed them hugging.

“We’re excited to see you. Now, we go back home,” he told Issachar, according to a statement from his office. She was expected to return to Israel aboard Netanyahu’s plane.

The release of the New Jersey-born 26-year-old is seen as a boost for Netanyahu and as confirmation in both countries that Israeli-Russian ties remain strong. The Kremlin, before the meeting, said it’s analyzing the U.S. peace plan, which Palestinians have denounced as an Israeli wishlist.

Netanyahu, currently under a criminal corruption indictment, faces a March 2 election and has campaigned on his ability to protect Israel’s interests abroad.

Israeli media have suggested that the pardon deal may have been eased by promises made by the Israeli government over the ownership of a building in Jerusalem that is important to the Russian Orthodox Church. The Alexander Courtyard, situated in Jerusalem’s Old City, has been contested for years and an Israeli court recently ruled in Russia’s favor.

TASS news agency reported earlier this month that Israel had told Russia it had begun the legal process of handing over the building to the Russian Orthodox Church.

Issachar was serving a seven and a half year prison sentence after being arrested last April when police found 9 grams (less than half an ounce) of cannabis in her bags during a stopover at a Moscow airport on her way from India to Israel.

Her family called her treatment disproportionate, and the case caused rare tensions between Russia and Israel.

“It has been a long journey that I would not wish upon anyone,” Yaffa Issachar, Naama’s mother, was quoted as saying by the Jerusalem Post, having traveled to Moscow for her daughter’s release. “Now, all I want is to hug my daughter Naama.”

By Vladimir Soldatkin and Dan Williams