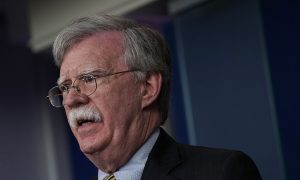 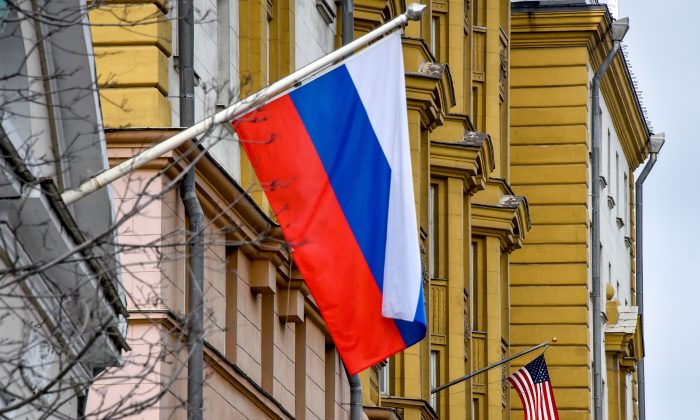 US national flag waves on the building of the embassy of the United States of America (R) in Moscow on April 2, 2018. (VASILY MAXIMOV/AFP/Getty Images)
US News

Russia Flies Over US Military Locations Under Treaty, After Being Denied Last Year

A Russian aircraft recently flew over military facilities across the United States as part of a surveillance flight permitted under the Treaty on Open Skies, several months after U.S. officials denied access to two Russian reconnaissance planes last year.

The Tu-154 aircraft (referred to as “Careless” by NATO) flew over a number of strategic points in the western part of the United States on March 28 and 29, including the highly secure Nellis Test and Training Range (NTTR) in southern Nevada, the location of Area 51, The Drive reported.

The Russian aircraft were equipped with surveillance materials, including optical and video cameras. On past missions, the aircraft were also permitted to have infrared line-scanning devices and sideways-looking Synthetic Aperture Radar, according to InMilitary. Panoramic cameras on the aircraft also help to gather a wide array of imagery along their flight path.

As part of the Open Skies Treaty, the United States has to inspect the Tu-154 aircraft before it can fly. On the aircraft itself, U.S. observers are aboard to ensure the Russians are in compliance with the treaty.

The treaty is designed to enhance “mutual understanding and confidence” to all 35 nations signed on as participants. through “observing military or other activities of concern to them.”

In August 2018, President Donald Trump signed into law the John S. McCain National Defense Authorization Act that suspended funding for the treaty until Russia fully complies with the obligations. Although the funding was cut, a State Department official later clarified that the United States was “not suspending its participation” in the treaty.

Russia said that the United States blocked access to two Russian Tu-214ON surveillance planes in September last year, and said the United States gave no explanation for the refusal. The aircraft had contained surveillance technology that U.S. politicians raised concerns about previously. The State Department didn’t immediately respond to a request for comment.

The rejection came after the U.S. House Armed Services Committee dropped a proposal from the U.S. Air Force to replace two of its own surveillance OC-135 aircraft with new planes in May 2018. The replacement, if it had gone through, would have marked the first new aircraft used by the United States in the treaty since 1967, according to the Nuclear Threat Initiative.

It is based on “complete territorial openness, on the use of unarmed observation aircraft, on sensors on board those aircraft, and on quotas of observation flights which each State Party is willing to accept, and entitled to conduct, annually,” according to the State Department. Some of the other nations include Turkey, the United Kingdom, Czech Republic, Belgium, Spain, and Germany.

Pentagon spokesperson Eric Pahon said the Russian crew was scheduled to leave the United States by March 30, after arriving on March 27.