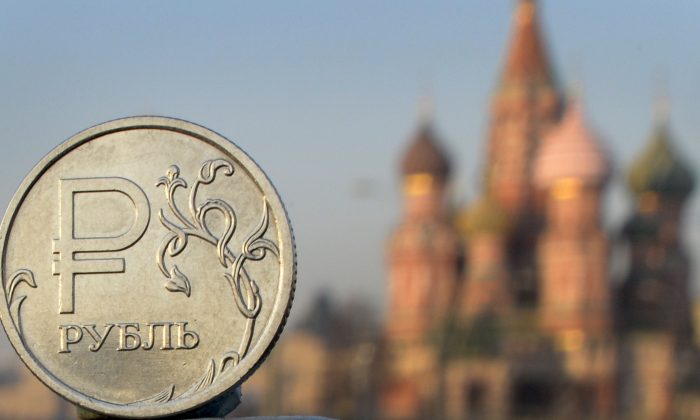 Russia’s central bank has more than doubled its key interest rate and taken emergency capital control measures to try stem the collapse of its currency and shore up financial stability as tough Western sanctions over the Kremlin-ordered invasion of Ukraine sent the ruble plummeting.

The Bank of Russia, the country’s central bank, on Feb. 28 announced it had raised the benchmark interest rate from 9.5 percent to a whopping 20 percent to stabilize markets and boost the falling ruble.

“External conditions for the Russian economy have drastically changed,” the Bank of Russia said in a Feb. 28 statement, adding that the rate hike “will ensure a rise in deposit rates to levels needed to compensate for the increased depreciation and inflation risk.”

Moscow is also poised to order Russian exporters to sell the bulk of their hard-currency revenues to boost ruble demand, the central bank said in a separate statement, with a final decision expected later in the day.

“This looks like a package of measures to defend the rouble including new mandatory sales of 80 percent of FX revenues for Russian companies,” ING analysts said in a note. “This latter measure looks to prevent the kind of FX hoarding seen during the Crimea crisis of 2014, when Russian energy companies were alleged to have held onto FX earnings and contributed to heavy RUB losses during that period.”

Downward pressure on the ruble following Russia’s annexation of Crimea in 2014 prompted the Russian central bank to hike rates to 17 percent.

In a further bid to shore up financial stability, Russian authorities have ordered brokers to suspend short selling on the Russian market and stop executing orders by foreign legal entities and individuals to sell Russian securities, according to Reuters.

“Russian authorities have to prevent fire-sales of Russian securities to prevent panic,” Commerzbank AG strategist Ulrich Leuchtmann told Bloomberg. It’s “something which is certainly harmful in the long run, but which Russian authorities seem to prefer given the risk of an even more significant ruble collapse.”

“We have taken a number of decisions to support the domestic economy, which, among other things, will be included in a plan of measures, and this plan will be presented in the near future,” Mishustin said at a meeting with deputy prime ministers on Monday.

A number of Western allies, including the United States, the UK, and the European Union have said they would block the Russian central bank’s ability to use its roughly $630 billion in foreign reserves to shield its economy from biting sanctions.

Some Russian banks are also set to be ejected from the SWIFT interbank payment messaging platform, while sanctions have also been imposed directly targeting Russian President Vladimir Putin and members of his inner circle.

Russia’s offensive in Ukraine on Monday entered its fifth day, though talks between the two sides have started at the Belarusian border, offering some hope for a ceasefire.

Putin has described the invasion as a “special military operation” meant to remove Ukraine’s nationalist leadership from power and degrade its military capability so it poses a lesser threat to Russia. He has argued that westward-looking Ukraine’s push for NATO membership is a danger to Russian security.

Western allies have called the military action a groundless act of aggression fueled by Putin’s desire to expand Russia’s sphere of influence, while rejecting claims that NATO, a defensive alliance, poses any threat to Moscow.