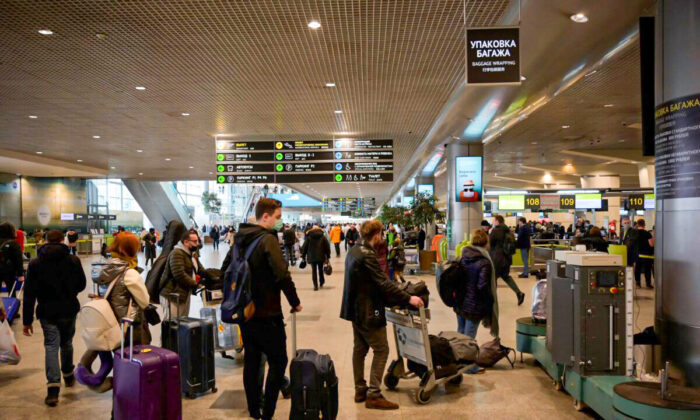 Moscow is looking into what extra incentives it can utilize to persuade highly-skilled workers who have relocated abroad to return to Russia, the country’s Industry and Trade Ministry said on Monday.

President Vladimir Putin’s “special military operation” in neighboring Ukraine has prompted a mass exodus of Russians who oppose the conflict or fear that life may become harder under the strain of multiple Western sanctions.

Since the Moscow-led invasion on Feb. 24, as many as 200,000 Russians have left their country, according to one estimate by Russian economist, Konstantin Sonin, at the University of Chicago, although the official figures are unknown.

However, prior to the invasion, Russia was already trying to counter an influx of highly-skilled workers—including some of its brightest scientists—from leaving the country under Putin’s regime.

A 2019 report compiled by the Atlantic Council, a think tank in Washington, D.C., called “The Putin Exodus: The New Russian Brain Drain” estimated that between 1.6 and 2 million Russians had fled to western democracies and other destinations since 2000, when Putin took office.

“The further development of this program and additional benefits to attract highly qualified Russian specialists from different spheres is being discussed,” the ministry said on Monday, Reuters reports.

The ministry did not provide further details regarding what the benefits might be but the current program includes cost of moving compensation, six months of unemployment benefits, and other financial incentives, the ministry said.

The Epoch Times has contacted the Industry and Trade Ministry for comment.

Alexander Sergeyev, president of the Russian Academy of Sciences, last week spoke of the large number of scientists who have fled Russia under Western sanctions, which were imposed in 2014 in response to Russia’s annexation of Crimea from Ukraine and have been further rightened and reinforced since February.

“It’s difficult to assess the scale of the losses, I believe they are large,” he told a news conference, according to the Interfax news agency.

“Competing for science with the whole world is hard; we need to liberate scientists’ initiative, creativity, give them the opportunity to work easily in (Russia),” he added while calling for support measures to be put in place in the country to “slow this flow” of highly-skilled workers leaving.

“It is necessary to introduce benefits, increase the financing of science, so that it provides, in addition to prestige, normal material conditions,” he stressed.

The latest alleged incentive program from the Industry and Trade Ministry comes as Russia appears to be retaliating further against Western sanctions and has threatened to limit exports of agriculture products to “friendly” countries.

Former Russian president Dmitry Medvedev, who is now deputy secretary of the country’s security council, said on Telegram on April 1 that many counties depend on supplies of food from Russia, and that the country’s “priority in food supplies is our domestic market. And price control.”

We will supply food and crops only to our friends (fortunately, we have a lot of them, and they are not at all in Europe and not in North America),” he said, adding that they could pay in both rubles and their national currency “in agreed proportions.”

He then explained that Russia would not supply products and agricultural products to those countries it deems as “enemies.”