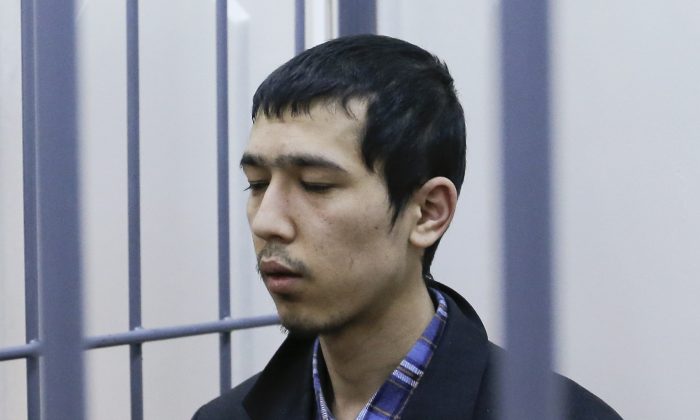 Abror Azimov, a suspect over the recent bombing of a metro train in St. Petersburg, sits inside the defendant's cage as he attends a court hearing in Moscow, Russia, April 18, 2017. (REUTERS/Sergei Karpukhin)
International

MOSCOW—Russia has detained the elder brother of the suspected organizer of an attack that killed 14 people on the St. Petersburg metro earlier this month, the Russian Investigative Committee said on Wednesday.

Akram’s young brother, Abror, was detained on Monday. He told a Russian court on Tuesday he was an unwitting accomplice in the April 3 attack.

Investigators said he had spoken with the suspected suicide bomber, Akbarzhon Jalilov, by telephone before the attack and helped mastermind the operation from a Moscow suburb.

Akram was detained in the Moscow region with a grenade, said the Investigative Committee, a state body which handles Russia‘s most serious crimes.

The Azimovs’ mother, Vazira, told Reuters that her elder son wasn’t in Russia when the metro was bombed. He had been in hospital in the city of Osh in Kyrgystan as recently as Saturday, she said, after returning from Russia at the end of March because of problems with health.

On April 15, he was taken from hospital and questioned by Kyrgyz state security, she added. After that, his mobile phone was disconnected and relatives could not find him.

A law enforcement source in Kyrgyzstan said Akram Azimov had flown to Moscow on Sunday.

Since the attack in St. Petersburg, Russian authorities have detained 10 people suspected of involvement. All are originally from Central Asia, a region of five mainly Muslim states that border Afghanistan, Iran, and China.

No group has claimed responsibility for the attack, which happened on a day that Russian President Vladimir Putin was visiting St. Petersburg, his native city.

If it is proven that the bombing was carried out by radical Islamists, that could pose a test for Putin’s policy of military intervention in Syria. The Islamic State group has threatened to take revenge for Russian air attacks on Syria by shedding blood onRussian soil.