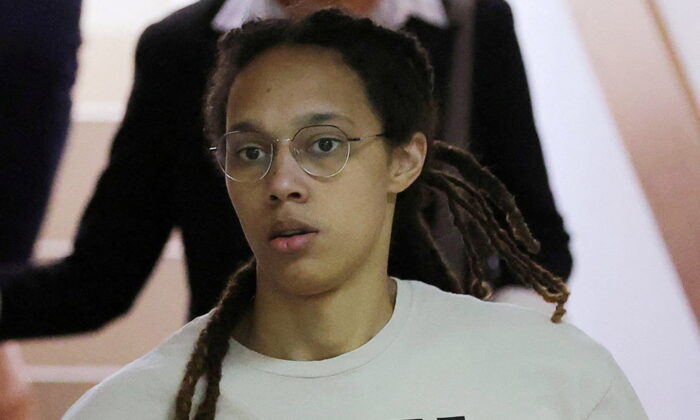 U.S. basketball player Brittney Griner, who was detained in March at Moscow's Sheremetyevo airport and later charged with illegal possession of cannabis, is escorted before a court hearing in Khimki outside Moscow onJuly 1, 2022. (Evgenia Novozhenina/Reuters)
Sports

Russia’s foreign ministry said on Wednesday that U.S. basketball player Brittney Griner, who was detained in Russia on drugs charges, may appeal her sentence or apply for clemency once a verdict has been delivered.

Russian foreign ministry spokesperson Alexei Zaitsev said in a briefing: “the court must first deliver its verdict, but no one is stopping Brittney Griner from making use of the appeal procedure, and likewise asking for clemency.”

Zaitsev said: “attempts to present the case as though the American woman was illegally detained do not stand up to criticism.”

In May, the U.S. State Department designated Griner as “wrongfully detained”.

Griner, who had been playing for a Yekaterinburg-based club during the off-season, was arrested at Moscow’s Sheremetyevo airport on Feb. 17 on drugs charges that carry up to ten years in prison.

Russian official said that cannabis-infused vaporiser cartridges, which are illegal in Russia, had been found in Griner’s baggage. Her trial began on Friday.