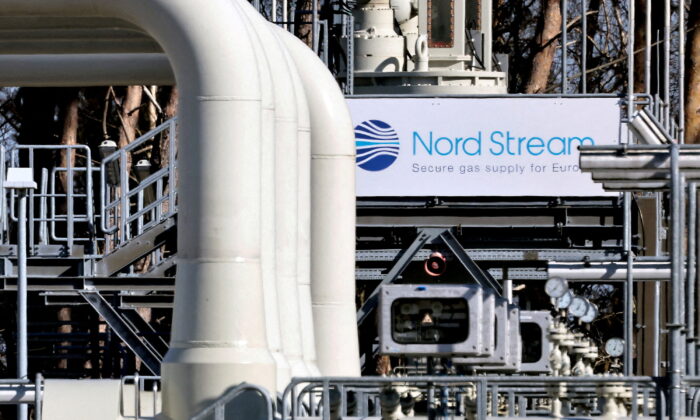 Pipes at the landfall facilities of the 'Nord Stream 1' gas pipeline are pictured in Lubmin, Germany on March 8, 2022. (Hannibal Hanschke/Reuters)
Energy

Natural gas prices in Europe stabilized on Friday after a volatile week in which Russia cut gas flows via the Nord Stream 1 pipeline by 80 percent, causing an energy crisis for the bloc ahead of the cold winter season.

Dutch wholesale gas futures, the European benchmark, were at 190.25 euros per megawatt-hour as of July 29.

Total numbers for gas futures were up 400 percent from the same time in 2021.

German benchmark energy futures were at 359 euros per megawatt-hour after reaching a record high at the beginning of the week.

The Nord Stream 1 pipeline is currently the primary route of Russian natural gas to much of Europe, accounting for a third of gas imports from the nation.

The EU decided on July 26 to scale back an emergency plan that would reduce demand for gas after reaching a compromise in which some countries will voluntarily reduce usage in anticipation of cuts through the pipeline.

If the voluntary reduced usage across the 27-member bloc fails to alleviate the problem, the cuts will be made mandatory.

The bloc will slash gas imports by 15 percent from August 2022 through March 2023, in the hope that lowering consumption rates will ease the impact of shortages if Gazprom finally terminates energy supplies.

Not Enough Energy for Winter

So far, the Kremlin has reduced or cut off natural gas to 12 European countries since the start of the war in Ukraine, partially due to a refusal of some EU countries to pay for gas in rubles.

There is also strong concern that several EU members will not be able to build up their gas storage capacity in time for the winter to keep their citizens warm and allow their vulnerable factories to operate.

Europe’s economic growth, which is recovering from the pandemic and is already suffering from multiple shortages and rising inflation, may take another hit if gas is further rationed.

As of July 27, gas flows via Nord Stream 1 fell to 14.4 million kilowatt hours per hour (kWh/h) in Europe, down from about 28 million kWh/h the day before, which was already running at just 40 percent of normal capacity.

The pipeline restarted barely one week prior following a scheduled 10-day maintenance period.

Gazprom blamed the pipeline crisis on the delayed return of a turbine being serviced for repairs in Canada, in addition to harsh Western sanctions over the war in Ukraine.

Gazprom deputy CEO Vitaly Markelov accused Canada of not delivering a key turbine designed by Siemens and used at Nord Stream 1’s Portovaya compressor station. The turbine has been undergoing maintenance in Canada.

Siemens Energy AG responded that Gazprom failed to provide customs documents to bring the turbine back to Russia.

Brussels has been accusing Moscow of using energy exports as a weapon to blackmail EU economies, while Russian authorities responded that the West is to blame for its own shortages caused by its own harsh sanctions.

EU officials have acknowledged that Moscow could completely halt gas flows in winter of 2022, pushing major energy importers like Germany and Italy into a recession and worsening already high prices for consumers and manufacturers.

Both countries reported that they had imported less gas from Gazprom in recent days.

Berlin has been facing an energy supply crisis since mid-June, when its national gas company Uniper was forced to take a 15 billion euro ($15.21 billion) government bailout after cuts in Russian energy deliveries.

Italy is also vulnerable, as the country typically imports 40 percent of its gas from Russia.

Italian gas company Eni, along with government officials in Rome, predict that they will face an energy supply crunch by the end of winter 2022–2023 if supplies are further cut from Russia.

Germany is at phase two of its three-stage emergency energy plan. In phase three, gas rationing will no longer be avoidable.

Christian Lindner, the German finance minister, said the government was more open to the use of nuclear power to avoid an electricity shortage. Former Chancellor Angela Merkel spent a decade winding down the nation’s nuclear energy industry before she left office.

Lindner said Germany’s three remaining nuclear plants could produce 6 percent of the power required to maintain growth if it loses its supply of gas from Russia.

German industry representatives are warning they may slash production rates in order to financially survive the gas shortages due to the government’s slow response in finding a reliable alternative source of fuel.

The German government is continuing to plead with households and industries to save gas to avoid future rationing.