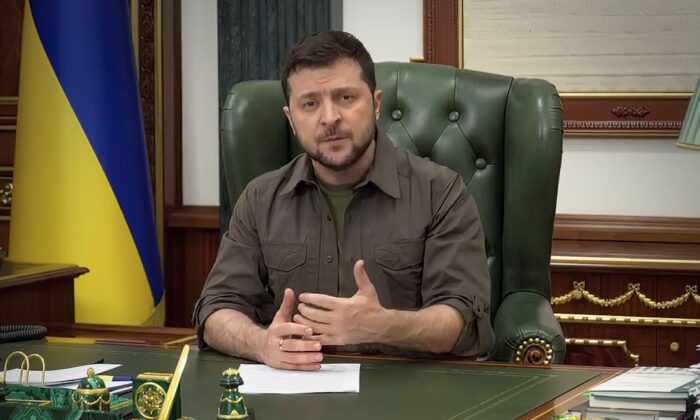 Ukraine President Volodymyr Zelenskyy said on Thursday that Russian forces now control roughly one-fifth of his country as fighting rages on for nearly the hundredth day.

Zelenskyy told Luxembourg’s legislature that Russian troops have entered “3,620 settlements in Ukraine” of which 1,017 of them have already been liberated and another 2,603 are to be released.

“As of today, about 20 percent of our territory is under the control of the occupiers,” Zelenskyy said. “Almost 125 thousand square kilometers. This is much larger than the area of all the Benelux Countries combined. About 300 thousand square kilometers are bestrewn with mines and unexploded ordnance. Almost 12 million Ukrainians have become internally displaced persons. More than 5 million, mostly women and children, have gone abroad.”

Despite Russian troops having taken over large swaths of the country, the Ukrainian president noted that Ukrainian forces have shown “extraordinary bravery” and refused to surrender to Moscow.

“We have stopped and are gradually pushing the army of invaders, which was recently considered the second strongest in the world, out of our territory,” he said.

Zelenskyy’s comments come shortly after he visited Kharkiv on Sunday, marking his first public appearance outside Kyiv since the conflict began.

In a statement, his office said that the president met with the members of the military and presented troops with state awards “and valuable gifts” while thanking them for their service.

During his visit, the Head of the Kharkiv Regional Military Administration Oleg Synegubov said that currently 31 percent of the region’s territory is temporarily occupied by Russian forces while 5 percent has been liberated from Russian soldiers.

“We are not yet able to fully inspect some of the liberated settlements, conduct full-fledged demining and begin rebuilding critical infrastructure, as shelling continues. Where we can do it remotely—we do it,” said Synegubov.

Synegubov added that Russian forces had destroyed 2,229 high-rise buildings, of which 225 were completely destroyed. The northern and eastern districts of Kharkiv have suffered the most damage and destruction, with a total of 30.2 percent of the total housing being impacted, according to the RMA head.

During his visit, Zelenskyy, among other things, inspected the destroyed residential buildings in the Saltivka district of Kharkiv and said that new houses in the city must be built with bomb shelters.

The Ukrainian president’s latest comments come after Russian troops have seized control of more than two-thirds of the strategically important eastern Ukrainian city of Sievierodonetsk after days of fierce fighting.

Serhiy Haidai, Head of the Luhansk Regional Military Administration, confirmed via Telegram on June 1 that Moscow’s forces have taken over 70 percent of the city, which is situated in the Donbass.

Multiple reports state that roughly 800 people, including children, are hiding from Russian shelling beneath a chemical factory in the city.

If Russian forces were to completely take over Sievierodonetsk, Russian president Vladimir Putin would effectively control all of Luhansk, which, along with the Donetsk collectively makes up the Donbass.

Zelenskyy told Luxembourg’s legislature on Thursday that Russian forces have “already destroyed almost the entire Donbass” which he said was “once one of the most powerful industrial centers in Europe” but is now completely devastated.

“The occupiers are destroying it city after city. Just look at the city of Mariupol. There were half a million people, ordinary peaceful life in an important industrial city. Now there are burnt-out ruins. And we still don’t even know exactly how many of our people were killed by the occupiers. At least tens of thousands—tens of thousands in a little less than 100 days.”

“This is what it means, in fact, to characterize this war as full-scale. And that is why we are so loud urging the world to support us,” he added.