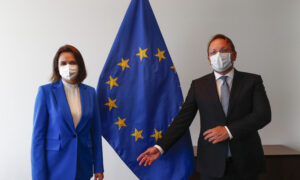 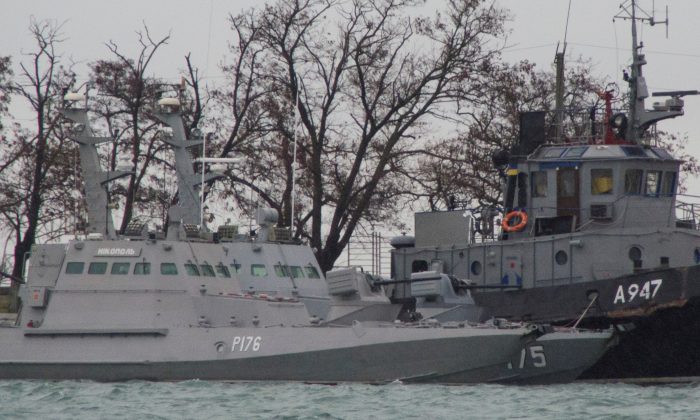 Ukrainian naval ships, which were recently seized by Russia's FSB security service, are seen anchored in a port in Kerch, Crimea, on Nov. 28, 2018. (Alla Dmitrieva/Reuters)
Europe

KIEV—Two Ukrainian Azov Sea ports, Berdyansk and Mariupol, are effectively under blockade by Russia as vessels are being barred from leaving and entering, Ukraine’s infrastructure minister, Volodymyr Omelyan, said on Nov. 29.

Overall, 35 vessels have been prevented from carrying out normal operations and only vessels moving toward Russian ports on the Azov Sea are permitted entry, he said on Facebook.

“The goal is simple—by placing a blockade on Ukrainian ports on the Azov Sea, Russia hopes to drive Ukraine out of our own territory—territory that is ours in accordance will all relevant international laws,” he said.

Omelyan said 18 vessels were awaiting entry into the Azov Sea, including four to Berdyansk and 14 to Mariupol. There is also a line of nine vessels to leave the Azov Sea and eight other vessels are standing by near the port berths.

Russia seized three Ukrainian navy ships and their crews on Nov. 25, near the Crimean peninsula, which Moscow annexed in 2014, over what it said was their illegal entry into Russian waters—a charge Ukraine strongly refutes.

The seizure of the navy vessels drove tension to its highest since 2015, when Moscow-backed rebels rose against the Kiev government in the eastern Donbass region, sparking a war that has killed tens of thousands.