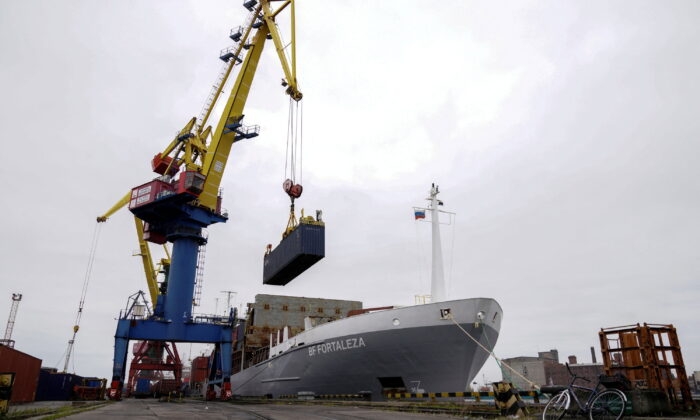 A crane lifts a shipping container at a commercial port in Kaliningrad, Russia, on Oct. 28, 2021. (Vitaly Nevar/Reuters)
Russia-Ukraine War

MOSCOW—Moscow’s foreign ministry on Friday blamed the United States for a Lithuanian ban on sanctioned goods crossing from the Russian mainland to the Russian exclave of Kaliningrad, which has increased already high tensions between Moscow and the West.

“The so-called ‘collective West’, with the explicit instruction of the White House, imposed a ban on rail transit of a wide range of goods through the Kaliningrad region,” the Russian foreign ministry said in a statement published on Friday.

It said the move was part of a pattern of “increasingly hostile actions from the American side” towards Russia.

Moscow has slammed the move, calling it a “blockade” and pledged a tough response. Vilnius has said it is prepared if Russia disconnects Lithuania from a regional power grid.

Russian officials have variously estimated the ban will halt 30 percent or 50 percent of cargo traffic, but have also said the goods can quickly be rerouted onto ships crossing the Baltic Sea.

Lithuanian Prime Minister Ingrida Simonyte said on Wednesday that Russian claims of a blockade were false.

She said passenger transit continued uninterrupted, and that the goods affected amounted to only 1 percent of total Russian freight transit to Kaliningrad.

Moscow also said on Friday that Washington’s refusal to waive airspace sanctions allow a Russian plane to fly to the United States to collect Russian diplomats showed that its calls for continued dialogue were not genuine.

Given the deterioration of relations, Russia said it was “impossible” to hold expert level consultations with Washington on a number of bilateral issues that had been due to take place in the near future. It did not specify which issues it was referring to, or when talks were supposed to take place.