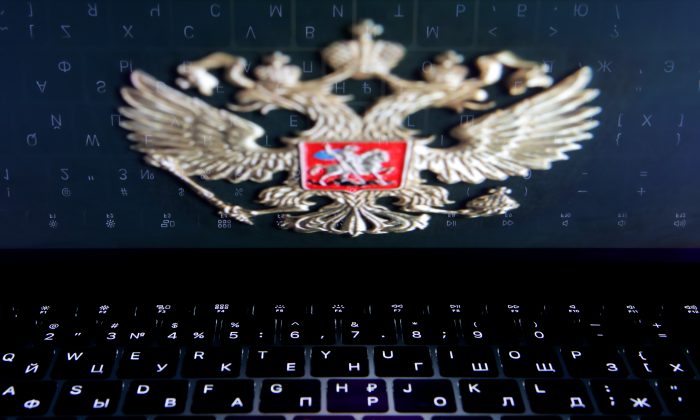 The coat of arms of Russia reflected in a laptop screen in a picture illustration on Feb. 12, 2019. (Maxim Shemetov/Reuters)
International

MOSCOW—Russian lawmakers backed tighter internet controls on Feb. 12 to defend against foreign meddling in draft legislation that critics warn could disrupt Russia’s internet and be used to stifle dissent.

The legislation, which some Russian media have likened to an online “iron curtain,” passed its first of three readings in the 450-seat lower chamber of parliament.

The bill seeks to route Russian web traffic and data through points controlled by state authorities and proposes building a national domain name system to allow the internet to continue functioning even if the country is cut off from foreign infrastructure.

The legislation was drafted in response to what its authors describe as an aggressive new U.S. national cyber security strategy passed last year.

The Agora human rights group said earlier this month that the legislation was one of several new bills drafted in December that “seriously threaten internet freedom.”

The Russian Union of Industrialists and Entrepreneurs has said the bill poses more of a risk to the functioning of the Russian internet segment than the alleged threats from foreign countries that the bill seeks to counter.

The bill also proposes installing network equipment that would be able to identify the source of web traffic and also block banned content.

The legislation, which can still be amended but is expected to pass, is part of a drive by officials to increase Russian “sovereignty” over its internet segment.

Russia has introduced tougher internet laws in the past five years, requiring search engines to delete some search results, messaging services to share encryption keys with security services and social networks to store Russian users’ personal data on servers within the country.

The bill faces two more votes in the lower chamber, before it is voted on in the upper house of parliament and then signed into law by President Vladimir Putin.