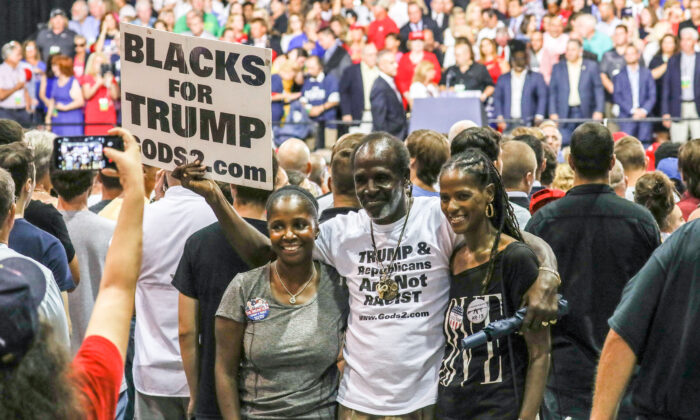 The new political action committee comes on the scene as two polls last week show that support for President Donald Trump among likely black voters, traditionally a monolithic Democratic voting bloc, has risen above the one-third mark. Rasmussen Reports pegged black support for Trump at 34 percent, while Emerson Polling reported it as 34.5 percent.

Democrats are reportedly anxious about Republicans potentially making inroads into their voting base and are tracking online movements that attempt to steer black voters away from the Democratic Party. Among those movements are Blexit, Foundational Black Americans, and American Descendants of Slavery.

Snerdley, a black man whose real name is James Golden, told The Washington Times that the Republican Party’s historical ties to black Americans are “inarguable,” but have been “purposefully ignored by academia and the mainstream media” for the past half-century.

“The result is that entire generations of Americans have been subjected to a false narrative about who Republicans are, their role in the civil rights movement, and their interest in seeing all Americans, including blacks, achieving the American Dream,” Golden said.

The new organization, New Journey PAC, says in a statement online that it aspires to promote conservative values using social media and to “debunk the phony liberal narrative that Republicans, conservatives, libertarians, evangelicals, and even conservative Democrats are racist.”

“Our mission is to establish a 24/7-365 messaging and education strategy that will not go dark between election cycles,” the PAC states.

Among the group’s projects is MAGA.BLACK, which it describes as a new online destination for activists.

Golden shared some unique, thoughtful perspectives about America in an interview with Ginni Thomas of The Daily Caller in late 2017.

“I don’t celebrate the Fourth of July. That’s white folks’ Independence Day, okay. It didn’t have nothin’ to do with no black people on the Fourth of July. That’s y’all Independence Day, y’all were freed. I wasn’t. Now I’m not mad at you because you celebrate. … I’m glad for you because those founders led the way to the rest of the country being free because this is the only country in history that set in motion during the Founding the self-correcting mechanisms for what they could not accomplish at that time politically, and that was an amazing thing.”

Ultimately, the system created by the framers of the U.S. Constitution led to freedom for black people and women, and the spread of democracy throughout the world, he said.

New Journey emphasizes that Republicans were there at the beginning of the civil rights movement, and it was Republican President Richard Nixon who “first brought Dr. Martin Luther King Jr. to Washington,” according to the PAC, and it was “Republican votes that defeated the Democrat Party’s filibuster of the civil rights legislation that kept the Democrat Party’s state-controlled Jim Crow laws in place.”

Near the top of the PAC’s website stands isolated the sentence: “Democrats Use and Abuse Black Americans.”

“Under the leadership of President Trump, Black-Americans enjoyed the lowest unemployment rate ever recorded. The Trump approach has produced an economy that works for all Americans, yet Democrats are promising more of the same—votes for crumbs. It is simply not enough to stand on the sidelines and hope for the best,” the PAC states.

Autry J. Pruitt, a black conservative commentator, is chief executive officer of the PAC. Daren Williams is listed as director of policy; Scott Hogenson is media director; and Todd Herman is digital director. Former Ohio Secretary of State Ken Blackwell (R) and former U.S. Sen. Jim DeMint (R-S.C.) are members of the PAC’s advisory board, and TechnoMetrica of Ramsey, New Jersey, is identified on its website as its “polling partner.”