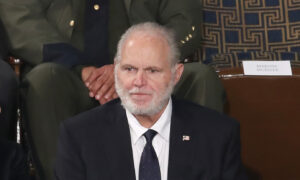 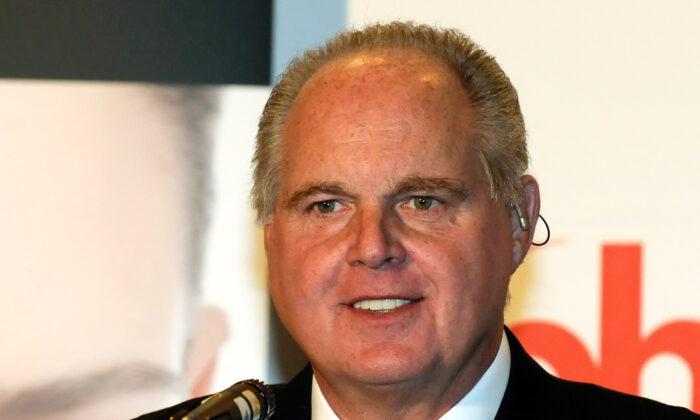 Radio talk show host and conservative commentator Rush Limbaugh, one of the judges for the 2010 Miss America Pageant, speaks during a news conference for judges at the Planet Hollywood Resort & Casino in Las Vegas, Nev. on Jan. 27, 2010. (Ethan Miller/Getty Images)
US News

David Limbaugh, political commentator and brother of Rush Limbaugh, thanked Americans for their support following his brother’s passing on Wednesday after a lengthy battle with lung cancer.

“Im not ready to speak yet but I Im so proud of my amazing, loving brother [sic],” he wrote in a heartfelt Twitter post. “Thousands of you have shared how much he meant to you.”

“My brother was the real deal. I can’t describe how sad I am but also how proud I am of my big brother. I love and adore you Rush. Thank you all.”

Im not ready to speak yet but I Im so proud of my amazing, loving brother. Thousands of you have shared how much he meant to you. My brother was the real deal. I can’t describe how sad I am but also how proud I am of my big brother. I love and adore you Rush. Thank you all.

Conservative radio host Rush Limbaugh died at the age of 70 on Feb. 17.

His wife, Kathryn Adams Limbaugh, announced his death on Wednesday morning. She told listeners at the beginning of Limbaugh’s radio show that he had been battling stage four lung cancer while continuing to broadcast his radio show.

He passed away at his Palm Beach, Florida home, his wife said, hours after his death.

Limbaugh announced his cancer diagnosis in February last year—a day before he was awarded the Presidential Medal of Freedom during then-President Trump’s State of the Union address. He said he started experiencing shortness of breath on Jan. 12, 2020, before he was diagnosed by doctors.

His brother David, an author who lives in his hometown of Cape Girardeau, Missouri, previously spoke fondly of Limbaugh in a Fox News op-ed published on Feb. 14, last year—shortly after Limbaugh announced his advanced cancer diagnosis.

David in his piece said he is “uniquely blessed” to be Rush Limbaugh’s brother “in ways too numerous to count.”

“I am blessed to be in the special position of witnessing firsthand the outpouring of love and prayers from his family, friends and fans.”

Limbaugh was born in 1951 in Cape Girardeau, Missouri. After leaving college, he entered radio in 1971 before founding his own radio show.

“When Rush began his nationally syndicated radio show, the liberal media monopolized television news, and his show became an oasis and a lifeline for millions who felt their voices had been ignored,” he wrote last year. “He gave them a sense of community, as they came to realize that the principles they believed in, their love for America and its founding ideas, were still commonly held.”

Speaking of his diagnosis in October last year, Limbaugh said that he was grateful to have been able to continue his work despite the physical toll it took on him.

In his final live show on Feb. 2 this year, Limbaugh criticized President Joe Biden’s decision to cancel the permit for the Keystone XL Pipeline project last month, referring to a Fox News interview conducted hours earlier with several people who had lost their jobs as a result of the move.

“What do you think the Democrat Party is? It’s clear as a bell they have no desire to enhance your life—they’re taking jobs away from you,” Limbaugh said. “This is what Biden and his administration are hellbent on doing. They want you to become dependent on them, a ward of the state. You’re not supposed to have enough power to oppose them.”

Biden has defended the decision, saying it was part of his administration’s larger agenda to tackle with the projected “climate crisis.”

Following Limbaugh’s passing, former President Donald Trump in a statement remembered him as “defender of Liberty,” and “a guiding light” to the United States.

“People, whether they loved him or not, they respected him,” the former president added, describing Limbaugh as a “very brave guy” and a “friend.”

“Melania and I express our deepest condolences to his wonderful wife, Kathryn, his family, and all of his dedicated fans. He will be missed greatly,” Trump added.