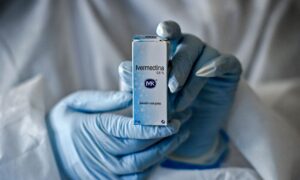 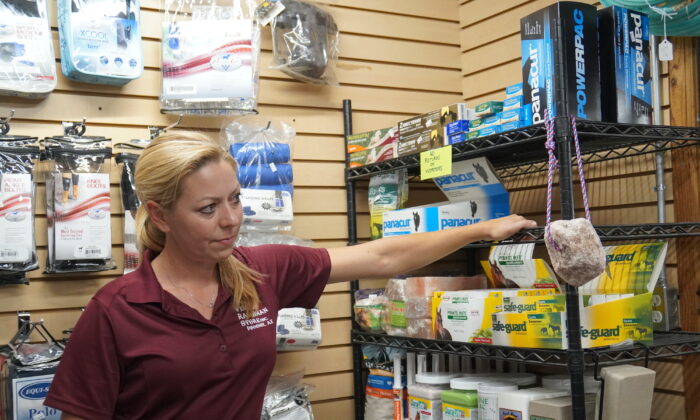 Amy Jonson, vice president of The Western Ranchman in Phoenix, Arizona, points to the empty shelf space that contained ivermectin for horses. The product is now sold out, due to demand from many customers who believe it's an effective treatment against COVID-19. (Allan Stein/Epoch Times)
Arizona

Amy Jonson pointed at an empty store shelf where the tubes of horse ivermectin paste used to be for sale and amply stocked.

In fact, Jonson said the feed store has been sold out for weeks. There’s no way of knowing when the next shipment will arrive, she said.

Jonson said the shortfall appears to be due in large part to an unexpected run on animal ivermectin products by people who think it will treat or prevent COVID-19.

It’s also become harder to obtain ivermectin for humans at some pharmacies, according to several physicians affiliated with the Front Line COVID-19 Critical Care Alliance (FLCCC), who prescribe ivermectin for their patients.

“Yes, it’s harder to come by [ivermectin] as retail pharmacies are not filling our prescriptions. We use compounding pharmacies,” said FLCCC-affiliated Dr. Jane Hendricks of Mesa, Arizona.

Unlike a regular pharmacy, a compounding pharmacy can customize a prescription, including ivermectin, based on a patient’s specific needs.

“The media is focused on the fact that patients made a poor decision in choosing to get it on their own through a vet store instead of seeking a physician who is willing to prescribe it. So it’s a way of mocking these patients for getting the horse drug,” Hendricks told The Epoch Times.

“Horse people,” as Jonson refers to customers who own horses, are now feeling the bite of the shortage of animal ivermectin, presumably for human consumption.

“It’s been crazy. Horse people are having to use different products for their animals,” she said.

Jonson said lately she will talk on the phone three, sometimes four times a day with people wanting to know more about the store’s ivermectin products and how they work.

“You can tell if they’re horse people or not” from the questions they ask, Jonson said. “When they ask how to dose it, horse people know how.”

“They tell me there are doctors on the internet pushing this,” Robinson told The Epoch Times.

In pharmacies, Ivermectin can also be hard to find. Pennsylvania resident Daniel K. said that he visited Giant, Acme, and CVS pharmacies to get Ivermectin. He had a prescription for the drug’s use to treat COVID-19.

“They all told me no for various reasons,” he said. “One of them even said that they had it. And then they asked me if it was in three milligrams or five milligrams, and I didn’t remember.”

When Daniel went home to check the prescription and returned to the pharmacy, the pharmacy told him they had run out.

“I’m like, ‘How did you run out in 15 minutes?’” Daniel said. “They said, ‘All the other pharmacists looked at the shelf wrong. It was the wrong drug.”

According to the U.S. Food and Drug Administration (FDA), ivermectin hasn’t been approved for use in preventing or treating COVID-19 in humans.

“Ivermectin is approved for human use to treat infections caused by some parasitic worms and head lice and skin conditions like rosacea,” the FDA says on its website. “Currently available data do not show ivermectin is effective against COVID-19. Clinical trials assessing ivermectin tablets for the prevention or treatment of COVID-19 in people are ongoing.”

However, a number of frontline doctors continue to stand by ivermectin as a safe and effective treatment for COVID-19.

COVID-19 has been “politicized,” Hendricks said, so any medication used to treat it “therefore will also be politicized.”

The operations manager at another FLCCC-affiliated physician’s practice in Arizona said the demand for ivermectin remains high given the public’s uncertainty over the experimental COVID-19 vaccines.

“The word is getting out that ivermectin is not just for horses,” the operations manager told The Epoch Times on condition of anonymity. “Mostly, [people] did their research on their own and they are determined that the vaccines are not the safe way to go. Ivermectin is the way to go. My feeling is there are enough [medical] professionals that have researched this. They are, after all, doctors.”

Though generally shunned and ridiculed as a horse de-wormer taken by people who don’t know better, ivermectin appears to have had much success in treating and preventing COVID-19 in countries such as India.

In August 2020, the Indian state of Uttar Pradesh was declared COVID-19-free after the government authorized the use of ivermectin among its 240 million inhabitants.

The FDA, however, maintains that ivermectin is an unproven treatment for the coronavirus and can be dangerous to humans in large doses.

On Aug. 20, the Mississippi State Department of Health (MSDH) announced an increasing number of calls from people with potential “ivermectin exposure,” ostensibly to treat or prevent COVID-19.

“At least 70 percent of the recent calls have been related to ingestion of livestock or animal formulations of ivermectin purchased at livestock supply centers,” the agency said in a statement.

The agency noted that 85 percent of the callers had mild symptoms, but one person was told to seek further medical attention.

“No hospitalizations due to ivermectin toxicity have been directly reported to the Mississippi Poison Control Center or the [MSDH],” the agency said.

The American Medical Association, American Pharmacists Association, and American Society of Health-System Pharmacists (ASHP) have all come out against prescribing ivermectin either to prevent or treat COVID-19 “outside of a clinical trial.”

“We are alarmed by reports that outpatient prescribing for and dispensing of ivermectin have increased 24-fold since before the pandemic and increased exponentially over the past few months,” the ASHP said in a statement.

“As such, we are calling for an immediate end to the prescribing, dispensing, and use of ivermectin for the prevention and treatment of COVID-19 outside of a clinical trial.”

Meanwhile, Tractor Supply Co. of Fountain Hill, Arizona has posted an ivermectin safety alert on its website, stating that the drug is not approved for use in treating or preventing COVID-19 in humans “and could cause severe personal injury or death.”

The FDA also points out that ivermectin intended for animals is different from ivermectin made for humans. One tube of Durvet Ivermectin Paste, for example, can treat a 1,200-pound horse, Jonson said.

Jonson said The Western Ranchman Store has probably sold 300 to 400 boxes of horse ivermectin paste over the past three months alone. Each box contains 12 tubes of paste.

“One person asked to buy a case, but ended up not buying it,” Jonson said. “I think when the Delta variant came out, sales really increased. These people are getting their information from YouTube and from doctors. People are scared of getting sick.”

At Mortar and Pestle Compounding Pharmacy in Flagstaff, Arizona, a pharmacist told The Epoch Times in a phone call: “We won’t be interested in participating [in any discussion about ivermectin]. Thanks.”

In a statement to The Epoch Times, CVS Health said, “The FDA has made it clear that people should not use ivermectin to treat or prevent COVID-19. Our pharmacists are empowered to use their professional judgment when reviewing a prescription and a prescriber’s diagnosis.”

Walgreen’s corporate headquarters didn’t respond to a request for comment.

An Arizona resident who asked to remain anonymous said that the Safeway Pharmacy in Williams, Arizona, filled out his two prescriptions for ivermectin at about $88 each.

A single tube of Ivomec horse ivermectin at The Western Ranchman Store, on the other hand, costs just $8.99, Jonson said.

At Olsen’s Grain Inc., in Dewey, Arizona, spokeswoman Cheyenne Brown said the company is also saddled by the recent spike in demand for Ivomec.

“We’re having trouble [getting resupplied],” she told The Epoch Times. “We’re selling a bunch of it. We don’t usually ask [customers] if it’s for them or their horse. It’s interesting, for sure.”

At least two of the company’s five stores in Arizona have been sold out of Ivomec in recent weeks, Brown said.

“We have other types of dewormers,” she added. “[Customers] have options.”

At Gordon’s Feed in South Phoenix, Arizona, employee Gordon Grantham said that while he has not yet seen an increase in demand for ivermectin products, the suppliers seem to be “all done.”

“They’re out of it,” he told The Epoch Times. “I’ve had a couple of people on the phone that asked about it.”

Jackson Elliot contributed to this report.