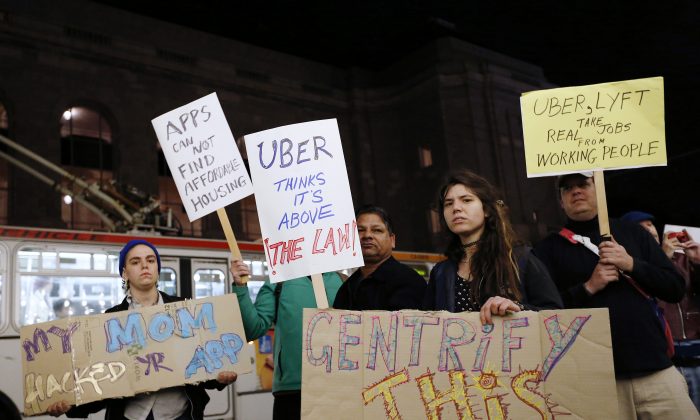 Companies like Uber and Netflix have an unfair advantage, but what to do?
By Matthew Little
biggersmaller
Print

A digital behemoth is gobbling up traditional business models faster than you can say “taxicab.”

Some are calling it the “sharing economy,” though “renting economy” is a more accurate description. Businesses like Uber, Airbnb, and AskForTask connect people who want something with those who can provide it—for a fee.

It’s giving Canadians cheaper rides, cheaper places to stay, and cheaper help around the house for those odd jobs—all through the convenience of a smartphone app.

The problem is, the renting economy hinges on cheap labour and critics say it leads to lower wages and precarious work. So far the government has yet to weigh in on the issue, leaving traditional businesses subject to sometimes onerous regulations while the new companies roam free-range.

Think-tanks are now chipping in with advice on a revolution that is just getting started.

While the term “sharing economy” has gained traction, critics ranging from labour activists to tech bloggers say it confuses the nature of what is actually happening and the fact that the people making all the real money in this space are those providing the platform.

Companies like Uber connect drivers with passengers and take a 20 percent cut for the service. Taskrabbit in the U.S. and AskForTask in Canada provide a similar service for odd jobs and take 15 percent and up. Amazon’s Mechanical Turks posts “microtasks” like writing a photo caption or cropping a photo that can pay as little as one cent each.

Innovation is moving faster than regulators can keep up with.
— Emily Norgang, Canadian Labour Congress

As these businesses get more established, those working through them have started sharing the sometimes gritty details. Common complaints are low pay and few of the same protections that come with regular jobs. People work as independent contractors of sorts. That means no pension contributions, unemployment insurance, or guaranteed minimum wage.

Critics of the growth of the renting economy warn it could wipe out jobs and the gains the labour movement delivered to workers over previous generations.

Armine Yalnizyan is the senior economist at the Canadian Centre for Policy Alternatives. She says one of the more serious challenges of the renting economy is the lack of rules. Much as Netflix has sidestepped the regulations that regular broadcasters face, new companies like Uber and Airbnb have avoided regulation.

“They are operating as if it is a post-regulatory environment, but we have regulations for a reason, including to not exploit people,” she said.

“I am not saying it is going to be easy to figure out the new rules that govern this, but if we accede to this idea that there is a new libertarian ethos to what the Internet can do in terms of providing jobs, that it is unregulatable, then we are in trouble.”

The challenge for governments is keeping pace with the speed of change, something they haven’t managed to do, says Emily Norgang, a senior researcher at the Canadian Labour Congress.

“Innovation is moving faster than regulators can keep up with, and a lot more research needs to be done to understand the impacts of this.”

Norgang is among a growing number of academics and researchers concerned that the job standards and wages Canadians are used to are now under threat.

“This new business model is being used to weaken labour protection, to drive down wages, and it really does shift risks onto the worker,” she says.

Another concern is the monopoly tendency of many online businesses. The trend has been that a clear frontrunner establishes market dominance and newcomers struggle to gain traction. That problem would be particularly worrisome to workers with nowhere else to go.

While these companies are disruptive to established businesses and could drive down wages, they also give consumers another option—a cheaper, easier option—and that makes them popular.

Investors see huge potential in these companies, and Uber has locked down a valuation of around $40 billion while reports put Airbnb’s value upwards of $10 billion.

These peer-to-peer platforms represent a wave of innovation that consumers are hungry for.

These peer-to-peer platforms represent a wave of innovation that consumers are hungry for. They offer everything from easier delivery services to rental tools, and broad objections are unlikely to slow them down. The only other option is to adapt.

Unfortunately, many governments don’t know what to do. When the Epoch Times asked the federal labour department and Employment and Social Development Canada (formerly HRSDC) if either was looking into the issue, a spokesperson suggested talking to provincial regulating bodies.

Neither the Alberta nor British Columbia labour ministries replied by deadline, but there are no studies of the issue on their websites, nor any recent policy discussions. Ontario’s Ministry of Labour, however, said it is working to update the Labour Relations Act, 1995 and Employment Standards Act, 2000 in part because of these new types of businesses.

Any change to regulations governing workers, or sectors like taxicabs, would face a host of challenges, such as figuring out if a person is an employee or a contractor, or balancing the needs of innovation against those of safety and fairness.

It’s an issue academics, tech bloggers, journalists, and think-tanks have been weighing in on.

Last week, the Mowat Centre, a public policy think-tank at the University of Toronto, published a report it hopes can help government’s chart a course.

The report, “Policymaking for the sharing economy,” concludes that the government’s inability to keep pace with technological change is “a persistent, and problematic, condition.”

But keeping up is essential to nurture innovation, offer consumer choice, and create opportunities to invest, says the report.

“Jurisdictions that move early to respond to new trends will benefit from better options for their citizens and more dynamic and competitive economies,” it concludes.

Noah Zon, one of the authors of the report, says governments need to be proactive enough that they anticipate change and are ready to respond.

“It makes it much more difficult to manoeuvre and work with the new operator and consumers when something is already an established part of our economy and society.”

Critics of the growth of the renting economy warn it could wipe out jobs and the gains the labour movement delivered to workers over previous generations.

The Mowat Centre made recommendations for how government could move things along more quickly. Many of those recommendations echo a U.S. think-tank, the Miliken Institute, which looked at the same issue but focused more specifically on the financial services sector, where peer-to-peer models are also changing the rules of the game.

An iterative approach is essential to many of these problems because governments don’t know the full impacts yet and need to learn as they go, suggest the think-tanks. They also need to revisit an issue repeatedly rather than passing legislation that isn’t looked at again for 20 years.

Brian Knight, an associate director at the Miliken Institute, suggests a principles-based approach that would lay out in broad strokes how companies should conduct themselves.

Rather than a rules-based approach, which sets out exact conduct, this approach is much quicker and leaves room for innovation while telling companies how they should behave.

“If instead of defining taxis with great specificity a rule covered the act of driving people for pay, then Uber would be covered from day one,” he says.

There is little certainty about what will happen as these companies play a bigger role in the economy besides the fact that prices will likely drop. A temp agency that rents a building would have a hard time matching prices against one based on a website, just like a taxi service where owners insure their own cars and don’t pay heavy licensing fees can beat out those who don’t.

If governments want to do more than wait and see what happens, the consensus is they need to pick up the pace and start looking further ahead.