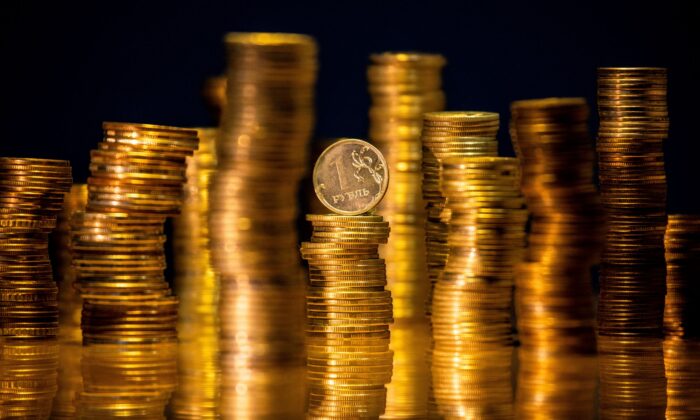 Ruble Firms Past 79 Versus Dollar, Stocks Down

The ruble briefly firmed past the 79 mark against the dollar on Monday, while stock indexes fell as the market lacked new momentum and investors watched developments around what Russia calls “a special military operation” in Ukraine.

The Ukrainian foreign minister said over the weekend there had not been any recent diplomatic communications between Russia and Ukraine at the level of their foreign ministries.

“The continuation of active fighting and a clear stalling of negotiations is the main risk for Russian assets through the risks of new sanctions,” said Dmitry Polevoy, head of investment at LockoInvest.

This week the ruble is expected to trade within the range of 79–82 to the dollar and 84–87 to the euro, Rosbank analysts said in a note.

The ruble can encounter some downside pressure from the central bank, which is expected to lower its key rate from 17 percent at its next board meeting on April 29.

Russian Central Bank Governor Elvira Nabiullina on Monday said the bank will not try to tame inflation by any means, as this would prevent businesses from adapting to the new reality.

Russian authorities ordered export-focused companies convert 80 percent of their revenue into rubles in late February as part of capital controls that Moscow imposed as the ruble headed to all-time lows amid unprecedented Western sanctions.

“Before the market and geopolitics stabilise, the full cancellation of capital control measures looks premature,” Promsvyazbank analysts said in a note.

This month, the ruble could see support from tax payments as companies are due to pay a record 3 trillion rubles ($37.50 billion) in taxes, for which some export-focused companies need to sell foreign currency, according to analysts surveyed by Reuters.

On the stock market, the ruble-based MOEX Russian index fell 1.9 percent to 2,380.2 points, while the dollar-denominated RTS index shed 0.7 percent to 948.5 points.

Russian shares in Petropavlovsk, which is also listed in London, outperformed the market by gaining 2.5 percent following massive losses last week after the company said it was considering putting itself up for sale in the wake of sanctions on Russia and the risk of countermeasures.

The MOEX index is expected to decline towards 2,250 points, Finam brokerage said in a note.