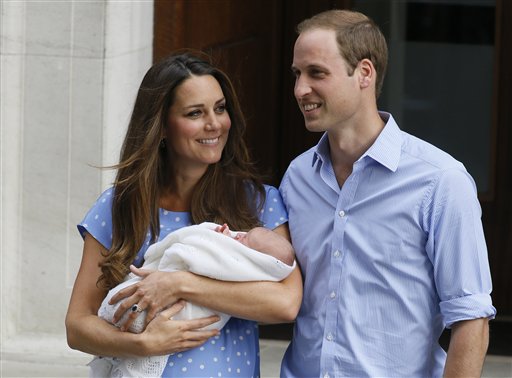 Britain's Prince William, right, and Kate, Duchess of Cambridge hold the Prince of Cambridge, Tuesday July 23, 2013, as they pose for photographers outside St. Mary's Hospital exclusive Lindo Wing in London where the Duchess gave birth on Monday July 22. The Royal couple are expected to head to London’s Kensington Palace from the hospital with their newly born son, the third in line to the British throne. (AP Photo/Kirsty Wigglesworth)
Royals

The royal baby of Prince William and his wife Catherine, Duchess of Cambridge, was named George Alexander Louis.

“The Duke and Duchess of Cambridge are delighted to announce that they have named their son George Alexander Louis,” said the Clarence House via Twitter. “The baby will be known as His Royal Highness Prince George of Cambridge.”

The baby was born two days ago and is third in line for the throne.

George Alexander Louis could symbolize an era. Choosing the name of a royal heir is no small matter—even if the name’s bearer is just over 8 pounds.

Arianne Chernock, an assistant professor of history at Boston University who specializes in the British monarchy said in an article on the university’s website: “The monarchy is one of the few remaining points of connection to a very long, deep and storied past. [Thus,] these names are symbolic. It’s similar to naming a pope.”

The baby’s grandfather, Prince Charles, did not officially have a name until a month after his birth—so the two-day old Prince George got his name rather quickly by royal standards. It is a traditional name imbued with traditional meanings.

George VI, the newborn prince’s great-great grandfather, chose to be crowned by the name George. He was born Albert Frederick Arthur George, and was known as Bertie among friends and family. He was the last king of England, and has become familiar to the modern world through the film, “The King’s Speech.”

There have been six kings named George, so if the prince chooses to keep this name should he one day be crowned, he will be King George VII. King George I ascended the throne in 1714.

The name Alexander hearkens back to 13th century Scottish kings Alexander II and Alexander III. They are considered some of the country’s greatest rulers, Scotland having enjoyed peace and prosperity during their reign.

One of Queen Elizabeth II’s middle names is also Alexandra.

According to Babynames.co.uk, Alexander means “to defend” or “warrior.” It is often linked to Alexander the Great.

Louis is one of Prince William’s names. He was christened William Arthur Philip Louis. Louis Mountbatten was Prince Charles’s great uncle and an important figure in his life. Mountbatten was killed by the Irish Republican Army (IRA) in 1979.

According to Babynames.co.uk, Louis means “famous warrior.” It was a common name among French royals and noblemen. Up to the French Revolution, sixteen French kings were named Louis.