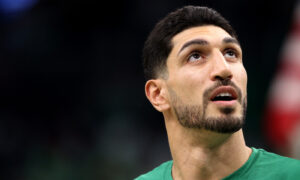 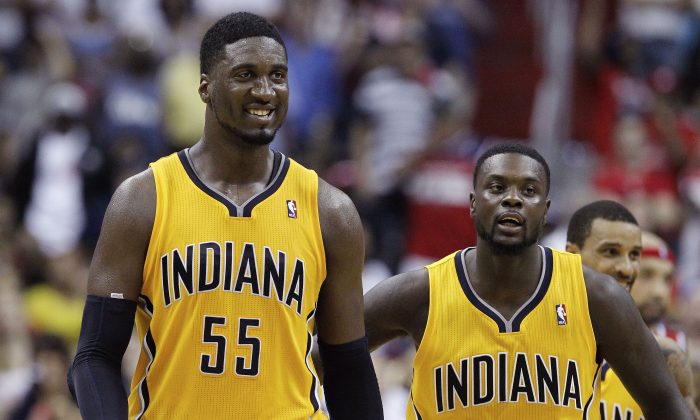 Indiana Pacers center Roy Hibbert (55) smiles as he walks across the court with Indiana Pacers guard Lance Stephenson (1) in the closing minutes of the second half of Game 4 of an Eastern Conference semifinal NBA basketball playoff game in Washington, Sunday, May 11, 2014. The Pacers won 95-92. (AP Photo/Alex Brandon)
NBA

Roy Hibbert is being shopped around by the Indiana Pacers and speculation has started on where he could go.

Hibbert is an interesting but sometimes disappointing prospect who has all the tools to be a star but faded in the 2014 playoffs.

Sources told Sporting News that Hibbert, who has two years and $30 million left on his contract, had been “quietly” shopped by the Pacers.

“I would say they’ve been doing that, but quietly,” one front-office source said.

“They’re open to making major changes, if they’re there,” one general manager added. “I think they’d be disappointed to see that same core group back intact, so it is a matter of, how drastic can the changes they make be? Moving Hibbert for multiple pieces would be a pretty drastic change, but they’re asking.”

Among the teams linked to Hibbert are the Portland Trailblazers. It’s been suggested in some articles that the Blazers could give up Wesley Matthews and perhaps another few players while receiving Hibbert and a first-round draft pick.

Other options include a swap with the Boston Celtics for Marcus Smart and Kelly Olynyk (The Pacers would give up a first-round pick here, too); and a swap for Brook Lopez at the Brooklyn Nets.

Still other options include the Milwaukee Bucks in some sort of deal including O.J. Mayo or the Cleveland Cavaliers, who could offer Anthony Bennett and possibly Dion Waiters.