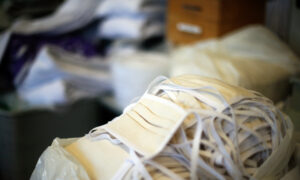 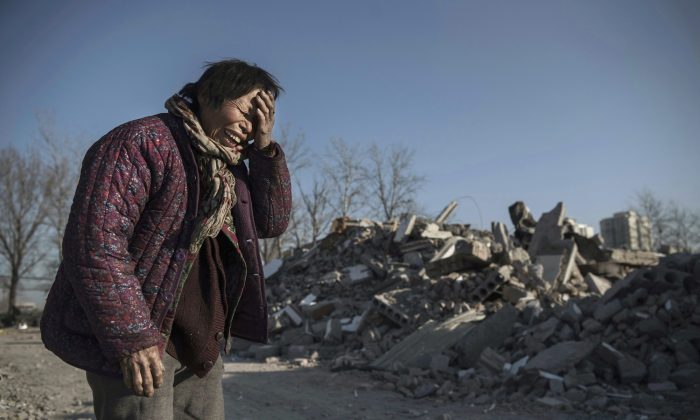 Zheng Yuzhi, whose apartment was demolished by authorities three months ago and is now homeless, in an area once filled with housing for migrant workers, in the Changing District of Beijing, China, on December 5, 2017. (Kevin Frayer/Getty Images)
Chinese Regime

Since taking power, Chinese leader Xi Jinping has vowed to eradicate rural poverty completely by 2020—making it a major political priority to prevent income inequality from causing social instability and chaos for the regime.

About 493 million, or 36 percent of China’s population, still live on $5.50 a day or less, according to World Bank data. The regime’s official data also indicates that more than 43 million people currently live on less than 95 cents a day.

Liu Yongfu, director of the State Council’s Leading Group Office for Poverty Alleviation and Development, admitted during another press conference held on the same day that central and local authorities have committed poverty relief-related misdeeds, such as falsely reporting the number of people who have escaped poverty.

Liu also noted that the Chinese authorities have investigated more than 60,000 cases of misreporting data and other misconduct, such as embezzlement, involving more than 80,000 Chinese Communist Party (CCP) officials in the past five years.

Tian Qizhuang, an independent writer and current affairs commentator, believes that the fundamental reason for the funds’ misuse is that there is no way for Chinese citizens to monitor how the authorities allocate the money.

“How much money from the country’s fiscal budget is for poverty alleviation? Where is the money spent?” Tian told Sound of Hope Radio. The Chinese Communist Party’s anti-corruption body, the Central Commission for Discipline Inspection, has previously uncovered incidents of officials embezzling local funds meant for poverty alleviation.

Tian gave the example of subsidy funds for damaged houses in rural areas, which the Chinese authorities are supposed to have disbursed, yet some villages have not received any money for years. So he believes the money must be taken by CCP officials at different levels.

Although Liu Yongfu proposed to strengthen the oversight of how poverty alleviation funds are used, experts remain skeptical.

“It is because we have a problematic system; the government’s fiscal expenditure is not transparent,” Ma Wenfeng, a special economics analyst at the state-run media Xinhua, told Sound of Hope.