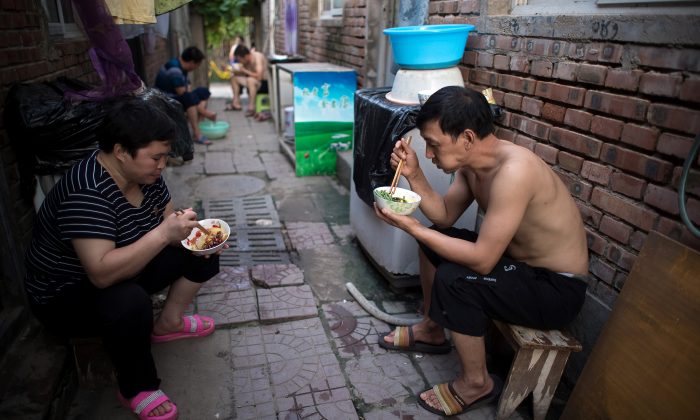 People eat dinner on the streets of a migrant village on the outskirts of Beijing, on August 17, 2017. (Nicolas Asfouri/AFP/Getty Images)
Chinese Regime

As social scientists will tell you, an uptick in poverty often leads to more crime and unrest.

In its history, the Chinese Communist Party (CCP) has been especially wary of potential social turmoil that could undermine its rule: see its brutal suppression of student democracy activists at Tiananmen Square in 1989, or its internet and media censorship apparatus wired to detect dissent against the Party.

Hence, Chinese leader Xi Jinping has been throwing around “lifting people out of poverty” as his catchphrase. He repeatedly referred to the idea in his recent New Year’s speech, and in his address to CCP members at the critical conclave, 19th National Congress.

In 2012, when he first came to power, he spoke of his goal of turning the whole of China into a “xiaokang” by 2020—a society where people lead comfortable lives with their material needs met.

According to World Bank data, about 493 million, or 36 percent of China’s population, live on $5.50 a day or less. Accomplishing Xi’s China dream is easier said than done.

Though the World Bank notes that the lifting of political restrictions on economic activity has led to millions escaping poverty in the past three decades, in its “China 2020” report, it warned about rising income inequality between urban and rural areas that could hinder efforts at reducing poverty.

Enlisting the Rich to Help the Poor

With China’s large debt and slowing economy, the central authorities are not keen on solving poverty on their own. The regime has instead enlisted the country’s wealthy to lend a hand. Last year, the regime’s white paper on “poverty reduction and human rights” praised the state’s efforts in getting big conglomerates to raise money for poor villages.

At the World Internet Conference held in Zhejiang Province in December, a panel was organized with the country’s biggest tech companies, including Alibaba Group, JD.com Inc., and Ant Financial Services Group, to partner them with 13 impoverished prefectures and counties. Their strategy for lifting poor villagers out of poverty was providing them with internet access and teaching them how to be tech-savvy.

Philanthropy is now mandated for rich entrepreneurs. The Chinese regime is not shy about its intentions; in an editorial titled “creating a structure for the state and the market to alleviate poverty together,” published in the state-run newspaper, the Study Times, it promoted using “market mechanisms” to help the poor and demonstrate the success of socialism with Chinese characteristics.

Another editorial, by the state-run Global Times, highlighted the responsibility of China’s internet giants to take up the mantle of “social stability”: a euphemism for stamping out public discontent and protests.

“These companies should use their own skills, capital, talent, management capabilities, and other ways to support the country’s economic development and political stability,” the editorial read. Social instability would spell trouble for the CCP, which rules by exacting control over its citizens.

In response, some of China’s richest business executives have stepped up to the plate with enthusiastic promises to obediently follow the Party line—as they must.

On Dec. 1, Jack Ma, the chairman of Alibaba, one of China’s biggest internet companies,  announced that after studying Party ideology from the 19th National Congress, he felt compelled to create a foundation to help the poor and pledged to raise 10 billion yuan ($1.6 billion) within five years. Part of the funds will be coming from Alibaba’s sales profits, but most of it will come from employees’ donations, Ma explained. He talked of encouraging a new generation of farmers to work the land and reap profits from modernized agriculture—aided by advanced technology that can crunch data.

This, of course, comes from the man who once said Chinese businesses should be “dating with the government, but not get married.”

Not to be outdone, on Dec. 1, the Chinese regime’s mouthpiece newspaper People’s Daily published an interview with Liu Qiangdong, the founder of Alibaba rival, e-retailer JD.com, where he explained how his company was working toward goals mentioned in Xi’s 19th Congress report.

In November 2017, Liu posted on his Weibo (China’s version of Twitter) account that he became the honorary village chief at the Ping Shitou village in Hebei Province. He wants to make all villagers escape poverty and increase their average income by tenfold within five years—“not by donations, but by [creating] industry!” He has yet to elaborate on those plans.

The Chinese regime has also pushed for e-commerce firms to help rural villagers set up online stores to sell their wares and produce—in the hopes of shrinking the wage gap between city and rural residents. The Shanghai-based Ule.com, an e-commerce joint venture between the state-owned postal service China Post and Tom Group, a Hong Kong media and tech firm, is a major participant.

Whether these business executives’ forced philanthropy will successfully lift people out of poverty remains to be seen. But one thing remains certain: as long as the Chinese regime asks them to help the poor, they will be doing so.