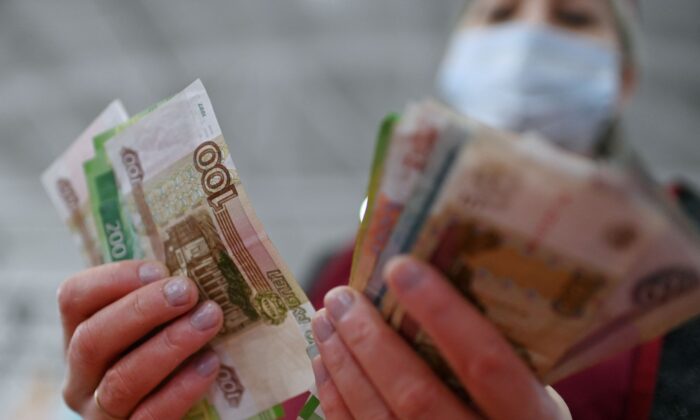 The Russian rouble slid more than 15 percent against the dollar and euro at market opening in Moscow on Monday but central bank intervention arrested its fall, after it tumbled to a record low in Asian trade as harsh new sanctions were slapped on Russia.

At 0800 GMT the rouble was trading at 95.48 to the U.S. dollar, down 15 percent from Friday’s close, and at 107.3550 per euro, 15.4 percent lower, with central bank selling of foreign currency set to limit its losses in Moscow trade. It had earlier touched a record low of 120 to the dollar on electronic currency trading platform EBS.

On Monday, the Russian central bank raised its key interest rate to 20 percent in an emergency move to support the rouble and address inflation risks.

The central bank has been intervening in FX markets since Feb. 24, when Russia began its invasion of Ukraine.

The central bank’s actions helped lift the rouble from its record low to around 114 per dollar on EBS at around 0730 GMT.

Promsvyazbank analysts said the Russian currency could move into a range of 100–120 to the dollar during the day.

Stocks trading on the Moscow Exchange was closed.

Russian markets took a hit after Western countries stepped up sanctions in retaliation for Russia’s invasion of Ukraine.

Russia’s central bank announced a slew of measures on Sunday to support domestic markets as it scrambled to manage the fallout of the sanctions that will block some banks from the SWIFT international payments system.

The central bank said it would resume buying gold on the domestic market, launch a repurchase auction with no limits and ease restrictions on banks’ open foreign currency positions.

Analysts at Rabobank had warned before the Moscow Exchange opened that the sanctions on currency reserves removed what little support the rouble had.

“Even the gold is not liquid if nobody can use FX in exchange for it. There will be a complete collapse in the rouble today…” they wrote.

Ray Attrill, head of FX strategy at National Australia Bank, said in a note on Sunday, “a collapse in the rouble appears inevitable on Monday morning,” and there was an increased risk of a Russian debt default as a result of the weekend developments.