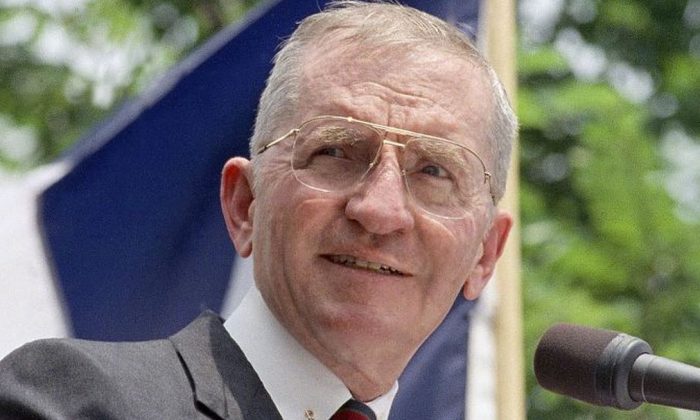 According to the Federal Election Commission, Perot Jr. wrote two checks to Trump on March 19. The amount for each was the maximum legal amount.

The donation was confirmed to be from Perot Jr., not Perot Sr., by a family spokesman speaking to Fox News.

A number of articles listed Perot as making way for Trump with his bold independent bid for president, which included getting 19 percent of the vote in 1992.

“Perot not only showed Trump how to run as a populist for president but also how to use cable news to build a brand, frame a nationalist agenda around opposing free trade, and, yes, how to use Mexico as a political foil,” according to the Boston Globe.

“Like Perot, President Trump is also a billionaire populist and a trade protectionist. Trump appeals to the same secular, nationalist voters that were Perot’s base. But Trump also appealed to and made pacts with all the factions of the Republican party,” the Review wrote.

“Of its billionaire populists, America chose the reality-TV show star and New York real-estate figure over the Texas naval veteran and entrepreneur.

As a boy in Texarkana, Texas, Perot delivered newspapers from the back of a pony. He earned his billions in a more modern way, however—by building Electronic Data Systems Corp., which helped other companies manage their computer networks.

Yet the most famous event in his career didn’t involve sales and earnings; he financed a private commando raid in 1979 to free two EDS employees who were being held in a prison in Iran. The tale was turned into a book and a movie.

Perot first became known to Americans outside of business circles by claiming that the U.S. government left behind hundreds of American soldiers who were missing or imprisoned at the end of the Vietnam War.

During the campaign, Perot spent $63.5 million of his own money and bought up 30-minute television spots. He used charts and graphs to make his points, summarizing them with a line that became a national catchphrase: “It’s just that simple.”

Perot’s second campaign four years later was far less successful. He was shut out of presidential debates when organizers said he lacked sufficient support. He got just 8 percent of the vote, and the Reform Party that he founded and hoped to build into a national political force began to fall apart.

However, Perot’s ideas on trade and deficit reduction remained part of the political landscape. He blamed both major parties for running up a huge federal budget deficit and letting American jobs to be sent to other countries. The movement of U.S. jobs to Mexico, he said, created a “giant sucking sound.”

Perot continued to speak out about federal spending for many years. In 2008, he launched a website to highlight the nation’s debt with a ticker that tracked the rising total, a blog, and a chart presentation.

A previous version of this story incorrectly stated that Ross Perot Sr. donated to President Donald Trump. The Epoch Times regrets the error.