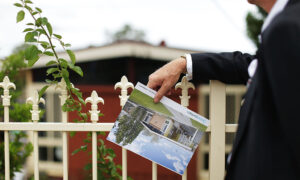 Luke, 11, was killed by his estranged father Greg Anderson at a junior cricket ground last week. Police shot Anderson after they couldn’t subdue him, after which he died.

Batty arrived at the funeral on Friday in a limo surrounded by other family members.

She was wearing a yellow jacket with a flower pinned to it, as well as a yellow scarf, reported the Australian Broadcasting Corporation.

The casket was also bright yellow and surrounded by yellow flowers.

A SpongeBob Squarepants toy was on top.

Most all mourners wore yellow, in remembrance of young Luke’s love of bananas.

Josephine, Luke’s grandmother, said Luke was a quirky and cheeky boy who wanted to be an astronaut when he grew up.

“Death claimed him much too early,” she told the Herald Sun.

A number of friends from Luke’s school turned out for the funeral.

Teacher Greg Partridge told ABC that Luke loved being a scout and swimming.

He said teachers often found it difficult to discipline Luke because they were too busy laughing along with him.

“Luke was on a journey and I believe he was beginning to understand and act out what it was to be a quality young man and a young man of integrity,” he said.

“You will be missed dearly Luke.”