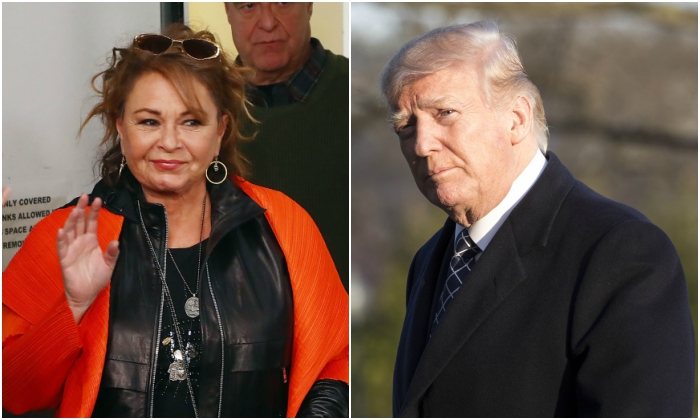 Sitcom star Roseanne Barr was derided as a conspiracy theorist by the national media after she tweeted about President Donald Trump freeing hundreds of children from trafficking rings around the world.

The New York Times, The Washington Post, CNN, and more than a dozen other news outlets all ran with the same angle, linking Barr’s tweet to a series of cryptic posts by a group calling itself “Q.” Barr did not mention “Q” in her tweet.

The White House report showed that 518 victims of human trafficking were rescued and 1,602 human trafficking suspects were arrested in 2017 by a dedicated unit at the Department of Homeland Security. During the same time, a government-funded human-trafficking hotline received reports leading to the identification of 21,644 victims.

Based on news articles and official government releases, nearly 3,300 victims of human trafficking have been rescued around the world since Trump took office and more than 5,300 suspects have been arrested.

Considering these facts, Barr’s full tweet is grounded in reality, but none of the data was mentioned in any major media outlet’s coverage of her tweet. The Washington Post came close by mentioning the questionable debunking of a different claim, which Barr did not make. That claim states that more human traffickers were arrested during Trump’s first two months in office than in a year under President Barack Obama. This is a strawman argument—attacking a claim unrelated to the one in question while pretending to stay on topic.

Given that the White House report was available for more than two weeks before Barr’s tweet, the media either willfully omitted the crucial context or failed to perform a basic review of public releases from the government.

“President Trump has freed so many children held in bondage to pimps all over this world. Hundreds each month,” Barr wrote in the tweet that started the media onslaught. “He has broken up trafficking rings in high places everywhere. notice that. I disagree on some things, but give him benefit of doubt-4 now.”

The revival of Barr’s show had just had a blockbuster premiere when she sent the tweet. The first episode of the show was viewed by 25 million people and set an all-time delayed viewer record, according to Variety. The day prior to the tweet, ABC renewed the show for another season based on the superb ratings of the first two episodes. The timing gave Barr, a vocal Trump supporter, a giant megaphone to share her views.

Her reference to “hundreds of children” is substantiated by facts. Approximately 25 percent of human trafficking victims are children, according to the White House. Applying that figure to the data gathered from news stories and government reports, approximately 825 children have been rescued from human trafficking since Trump took office.

In her tweet, Barr attributed the rescues to Trump. This is also well-founded.

In September last year, Ivanka Trump, the president’s daughter and senior advisor, and John Sullivan, the Deputy Secretary of State, joined 20 world leaders at the United Nations for a global call to end modern slavery, also known as human trafficking. The State Department used the occasion to announce a $25 million grant to the Global Fund to End Modern Slavery.

“Human trafficking is a sickening crime at odds with our very humanity,” Trump wrote in the proclamation. “My administration continues to work to drive out the darkness human traffickers cast upon our world.”

Emboldened by the president’s focus on the issue, Congress has passed legislation long called for by human trafficking victims and their advocates. On Wednesday, Trump is scheduled to sign that bill, titled “The Allow States and Victims to Fight Online Sex Trafficking Act of 2017” (FOSTA), into law. Although FOSTA is not yet law, it has already resulted in the shutdown of two of the biggest websites used by human traffickers—Backpage.com and the personal ads section of Craigslist.

Victims’ advocates cheered when Backpage.com was shut down on April 6. The massive website listed ads primarily for sex and had affiliates across the United States and around the world. The company generated $135 million in revenue in 2014, New York Times reported.

Nearly three-quarters of the cases submitted to The National Center for Missing and Exploited Children relate to ads posted on Backpage.com, the center told Congress, according to Reuters.

“Today, Backpage was shut down. It’s a huge step. Now no child will be sold for sex through this website,” tweeted Senator Heidi Heitkamp (D-N.D.).

Trump was outspoken about pedophiles and human traffickers long before he announced his run for president.

Got to do something about these missing chidlren grabbed by the perverts. Too many incidents–fast trial, death penalty.

“Got to do something about these missing chidlren [sic] grabbed by the perverts,” Trump wrote on Twitter in 2012. “Too many incidents–fast trial, death penalty.”