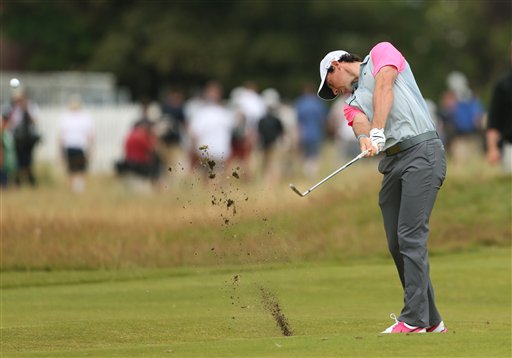 Rory McIlroy got a raucous heckler ejected from The Open Championship after the person tried to disrupt McIlroy at the 16th hole.

The heckling didn’t really work but turned out badly for the heckler. After enduring the noise, McIlroy beckoned marshals, who came over to take away the heckler.

Apparently there was another person with the heckler who also got ejected.

Missy Jones, who was at the open, said via Twitter said that one of the hecklers purposely coughed during Rory’s backswing while the other was the loud heckler.

Earlier in the round, a heckler kept yelling “Sergio is going to catch you” at McIlroy every shot, but it’s unclear if it was the same one.

HOYLAKE, England—Rory McIlroy completed a wire-to-wire victory Sunday in the British Open to capture the third leg of the career Grand Slam.

McIlroy led by six shots going into the final round and never let anyone closer than two shots. He closed with a 1-under 71 for a two-shot victory over Sergio Garcia and Rickie Fowler.

Garcia put up the biggest fight. He was two shots behind when he left a shot in the pot bunker right of the 15th green and made bogey. Birdies on two of the last three holes were not enough to catch McIlroy.

McIlroy won the 2011 U.S. Open and the 2012 PGA Championship. He joins Jack Nicklaus and Tiger Woods as the only players with three different majors at age 25 or younger.