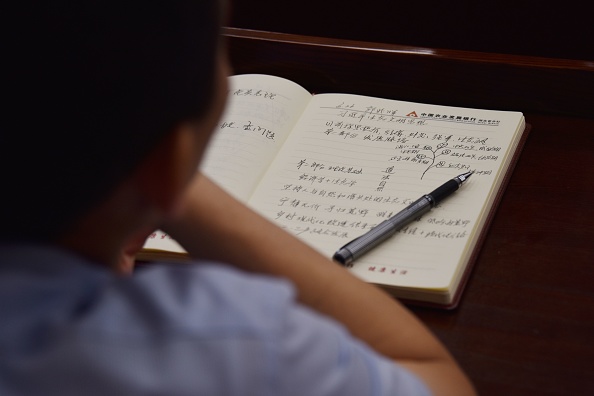 An adult student taking notes on Xi Jinping thought in a class at the Party School of the Chinese Communist Party's Central Committee, during a government-organized tour for foreign journalists in Beijing on June 26, 2019. (Leo Ramirez/AFP via Getty Images)
Opinion

Root Cause of China’s Shortage of Professional Talent

With China facing a shortage of professional talent, a specific conference was held to address the situation, which indicated a fundamental problem of the Chinese government.

From Sept. 27 to 28, the Chinese Communist Party (CCP) held a Central Talent Work Conference. The importance of the conference was shown by the participation of all seven members of the Standing Committee of the Central Political Bureau of the CCP.

Given that its technology companies have been sanctioned one after another, the senior members of the CCP put forward the slogan of “independent innovation in science and technology.”

Despite this, Xi’s speech at the conference revealed the root cause of the predicament faced by the CCP—the shortage of professional talent.

According to Xinhua News Agency, Xi Jinping stated: “The Party’s leadership in talent-related work has been comprehensively strengthened. The scale, effectiveness, and comparative advantages of our talent pool have been steadily increasing. Our nation already has a large-scale, outstanding, well-structured, and prominent talent pool.”

Given that the fields of science and technology in China have had no breakthroughs, the statement by Xi is clearly unconvincing. The CCP used to promote Huawei, a major Chinese multinational technology corporation, hoping that it would dominate the internet industry.

Nonetheless, the great ambition of Huawei was thwarted by the diplomatic disputes over microchips that are essential for the making of its electronic products.

On Sept. 25, Meng Wanzhou, Huawei chief financial officer who had admitted to using a Hong Kong shell company called Skycom to sell equipment to Iran in violation of U.S. sanctions, arrived in China after spending three years under house arrest in Canada while fighting extradition to the United States.

Because Huawei’s 5G technology was developed by people who previously worked for Nortel Networks Corporation headquartered in Canada, Meng Wanzhou, who was thus valued by the CCP and living a luxurious life in Canada, is expected to not leak any more secrets of Huawei’s stealing intellectual property after returning to China.

The CCP’s lack of technological expertise can be seen in the speech given by Xi Jinping who said, “It is essential to raise our awareness of unexpected situations and focus more on the cultivation of our own talents.”

Xi’s statement inadvertently denies the aforementioned achievements in talent-related work and points out that the development of China’s science and technology over the past few decades was based on stolen Intel.

Once the thefts are interrupted, the CCP will encounter difficulties in no time. Can the CCP really cultivate its “own” talents despite having said it will do so?

“We have the largest higher education system in the world,” Xi said at the conference. “And the system is fully capable of producing a large number of talents and experts.”

The reality is that the CCP used to vigorously promote the “Thousand Talents Plan” in an attempt to steal advanced technologies from the United States and other Western countries on a larger scale.

Concerning the deterioration of the relations between China and the United States, Japan, and European countries, this plan is on the verge of termination.

Under the circumstances, a large number of Chinese students looking forward to studying in the United States have been denied a visa or repatriated to China because they were suspected of technical theft or being affiliated with the Chinese military.

The reason the CCP’s Ministry of Foreign Affairs has been censuring the United States is exactly because China’s higher education system cannot produce the professional talent it needs.

CCP Is the Arbiter of Talent

After mentioning a lot of clichés about talent-related works, Xi Jinping suddenly said, “We must establish a utilization mechanism of talents based on trust,” as reported by Xinhua News Agency.

Such a CCP-style approach indicates the crux of China’s talent-related problem, that is, the judgment of talent is based mainly on the trust of officials, not the abilities one has. To be recognized as talented in China, one must stand for and show loyalty to the CCP.

In China, only those who are recognized by CCP officials can be deemed “talented” and valued. As for the large number of real talented people who are unaware of politics, they can only step aside as no one will consult their opinions or ongoing projects. Should they disobey the unreasonable instructions of, or appear cleverer than, the CCP, they might even be ostracized or suppressed.

It is for these reasons that many Chinese with real abilities, who are commonly seen in the high-tech companies in the United States and other Western countries, were forced to leave China, a nation where they became useless. It seems impossible for the CCP, which has been adopting adverse policies, to retain and produce its own talented citizens.

“It is necessary to … be talent-oriented, trust talents, respect talents, treat talents kindly, and tolerate talents,” Xi Jinping emphasized in his speech, in which he then said in a contradictory manner: “To do a good job of talents, we must adhere to the correct political direction,” insisting that “the party must manage talents.”

It can thus be seen that the CCP’s political work of recruiting talent will continue as usual, and will end up in failure. The root cause of the CCP’s talent-related problem and its overall decline in economy, technology, and social system is that its senior officials have been demanding that “the party must manage everything, including talents.”

The United States and other Western countries have been decoupling from China, making the Chinese realize that the CCP’s so-called “system advantage” and “national governance” are factually incorrect.

Be that as it may, the truth is, however, the opposite. The rapid economic and technological growth of China in the past few decades has mainly benefited from its close contact with the United States and other Western countries.

It is precisely because of this “strong leadership of the party,” manifesting in the CCP’s concealment and spread of the Coronavirus as well as its provocative “Wolf Warrior” diplomacy, that China is ostracized by the major countries of the world. The Chinese miracle then disappeared.

China’s development does require a large number of talented people. To have more of these talents stand out for China, the CCP must dispel its notion that “the party must manage everything, including talents” and build a proper system in which the real talents are in charge of the nation. Only by doing so can China return to the world stage in the near future.