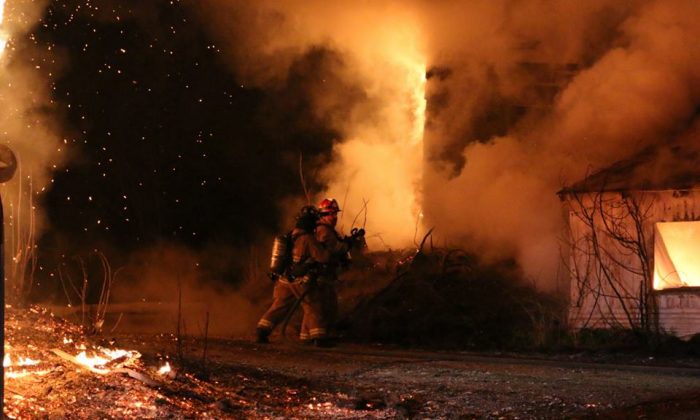 One of the fires in Fleetwood (Fleetwood Fire Company)
US

Rookie Firefighter in Pennsylvania Charged With 3 Counts of Arson

A rookie firefighter was charged with arson in a rural Pennsylvania county.

According to WFMZ-TV, 19-year-old Cody Weidner was arrested for his alleged involvement in three separate fires. He had recently signed on with the Fleetwood Fire Department in Berks County and was a probationary firefighter.

Police said he was involved in a fire that damaged an unoccupied home in August, an attempted arson at a garage last week, and a fire that destroyed a shed and spread to a barn on Saturday night.

No injuries were reported in the fires, WFMZ reported.

He was charged with three counts of arson, reckless burning, criminal mischief, reckless endangerment, and risking or causing a catastrophe.

Fleetwood Fire Co at the barn fire on Baldy Rd, Maxatawny Twp. (Website not updated due to hosting issues). Fire is under investigation, anyone with info contact PA State Police.

On the Fleetwood Fire Company’s Facebook page, Fire Chief John Manmiller wrote: “The Fleetwood Volunteer Fire Company has worked very closely with the Fleetwood Police Department over the course of the past few months to investigate and assist in any way possible the rash of suspicious fires that have plagued the borough and fire department. The fires or attempts at starting fires in Fleetwood began in August of this year and has kept the department busy with fires occurring almost every week.”

He added: “Buildings can be rebuilt. Our concern is with the safety of our residents. We are thankful no one was injured. The members of our department, and members of our mutual aid companies who assist us in responding to the calls, put their lives on the line every time they leave there homes and stations. To respond on a call at any time where there may be suspicions on the cause, make the firefighters that are doing this job for the right reason, sick to their stomachs. This person passed a mandatory background check prior to membership. He participated in training but was not a certified interior firefighter. He has been suspended with intent to dismiss pending the outcome of the judicial systems proceedings.”

A message from our fire chief regarding the arson cases: (and any comments supporting the rest of the volunteers…