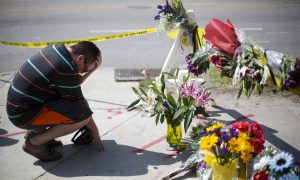 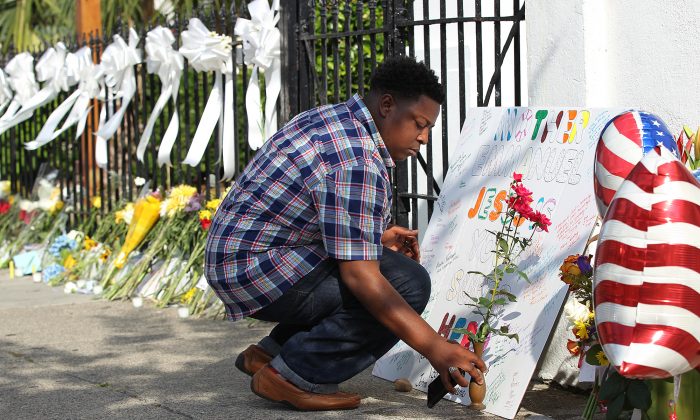 Jermaine Jenkins, 25, Johns Island, S.C., sets out a sign and some flowers in front of the Emanuel AME Church on Friday, June 19, 2015 in Charleston, S.C.
Crime and Incidents

CHARLESTON, S.C.—They forgave him. They advised him to repent for his sins, and asked for God’s mercy on his soul. One even told Dylann Storm Roof to repent and confess, and “you’ll be OK.”

Relatives of the nine community leaders shot down during a Bible study session at their historic black church confronted the shooting suspect Friday during his initial court hearing, and spoke of love.

“I forgive you, my family forgives you,” said Anthony Thompson. “We would like you to take this opportunity to repent. … Do that and you’ll be better off than you are right now.”

Roof, who faces nine counts of murder, was ordered held on $1 million bond on a separate gun charge. He appeared by video from the county jail, looking somber in a striped jumpsuit and speaking only briefly in response to the judge’s questions.

A police affidavit released Friday accused Roof of shooting all nine victims multiple times, and making a “racially inflammatory statement” as he stood over an unnamed witness.

Felecia Sanders survived the Wednesday night attack by pretending to be dead, but lost her son Tywanza. She also spoke from the judge’s courtroom, where Roof’s image appeared on a television screen.

“We welcomed you Wednesday night in our Bible study with open arms. You have killed some of the most beautifulest people that I know. Every fiber in my body hurts … and I’ll never be the same,” Sanders told Roof.

“Tywanza was my hero,” Sanders said, but even she showed some kindness as she confronted the man accused of killing her son: “As we said in Bible Study, we enjoyed you but may God have mercy on you.”

Roof, 21, bowed his head slightly as the relatives spoke. From the jail, he could hear the people talking, but couldn’t see them, because the camera shows only the judge.

The relatives’ remarkable comments seemed in keeping with a spirit evident on the streets of Charleston Friday, where people built a memorial and planned a vigil to repudiate whatever a gunman would hope to accomplish by attacking the Emanuel African Methodist Episcopal Church, one of the nation’s most important African-American sanctuaries.

“A hateful person came to this community with some crazy idea he’d be able to divide, but all he did was unite us and make us love each other even more,” Mayor Joseph P. Riley Jr. said as he described plans for the evening vigil at a sports arena.

We welcomed you Wednesday night in our Bible study with open arms. You have killed some of the most beautifulest people that I know. Every fiber in my body hurts … and I’ll never be the same.
— Felicia Sanders

A steady stream of people brought flowers and notes and shared somber thoughts at a growing memorial in front of the church, which President Barack Obama called “a sacred place in the history of Charleston and in the history of America.”

“This was an act of racial terrorism and must be treated as such,” the Rev. Cornell William Brooks, president of the National Association for the Advancement of Colored People, said Friday in Charleston.

Roof had complained while getting drunk on vodka recently that “blacks were taking over the world” and that “someone needed to do something about it for the white race,” according to Joey Meek, who tipped the FBI when he saw his friend on surveillance images.

Roof also told him he used birthday money from his parents to buy a .45 Glock pistol before the attack, Meek said. The affidavit said Roof’s father and uncle also called authorities after seeing surveillance photos, and that the father said Roof owned a .45-caliber gun.

Brooks said hate crimes take aim at collective values, but “we have never allowed ourselves to be victims, we have never capitulated, we have never laid prostate before the demagogue of racism in this country.”

“This is a moment in which we say to them, the white nationalists movement, those purveyors of hate, we as Americans will not subscribe to that philosophy. We will not give up, we will not give in,” he said.

Roof was arrested in North Carolina after an alert motorist recognized him, and returned in shackles to a county jail where he was being held next to the cell of Michael Slager, the white former police officer charged with fatally shooting black motorist Walter Scott in neighboring North Charleston.

It was the third arrest for Roof, who was quizzed by police in February after workers at the Columbiana shopping mall said he appeared dressed entirely in black, asking strange questions about employee movements and closing times. He was charged then with possessing suboxone, a drug typically used to treat heroin addiction. A trespassing charge was added after he showed up again in April, prompting a three-year ban from the mall.

The victims of the church shooting included Clementa Pinckney, a state senator who doubled as the church’s lead pastor, and eight others who each played multiple roles in their communities and families: ministers and coaches, teachers and a librarian, counselors and choir singers and the church sexton who kept the historic building clean.

“The suspect entered the group and was accepted by them, as they believed that he wanted to join them in this Bible study,” Charleston County Coroner Rae Wilson said. Then, “he became very aggressive and violent.”

The Justice Department is investigating whether to file federal hate crime charges, although Attorney General Loretta Lynch said state prosecutions are sometimes more appropriate. Obama pointed to lax gun controls as a factor, and complained that Washington politics have shut down efforts to require universal background checks for gun purchases.

Most of the presidential candidates avoided mentioning guns at all.

Spilling blood inside the “Mother Emanuel” church, founded in 1816, evoked painful memories of the racist violence that black churches have so often suffered, and the values their congregations have tried to uphold in response.

“For me, I’m a work in progress and I acknowledge that I’m very angry,” said Bethane Middleton-Brown, who appeared in court on behalf of her sister, the Rev. DePayne Middleton Doctor. “We have no room for hate. We have to forgive. I pray God on your soul. And I also thank God I won’t be around when your judgment day comes with him.”

Pinckney, 41, was a married father of two and a Democrat who spent 19 years in the South Carolina legislature. The other victims were Cynthia Hurd, 54; Tywanza Sanders, 26; Myra Thompson, 59; Ethel Lance, 70; Susie Jackson, 87; and the reverends DePayne Middleton Doctor, 49; Sharonda Coleman-Singleton, 45; and Daniel Simmons Sr., 74.