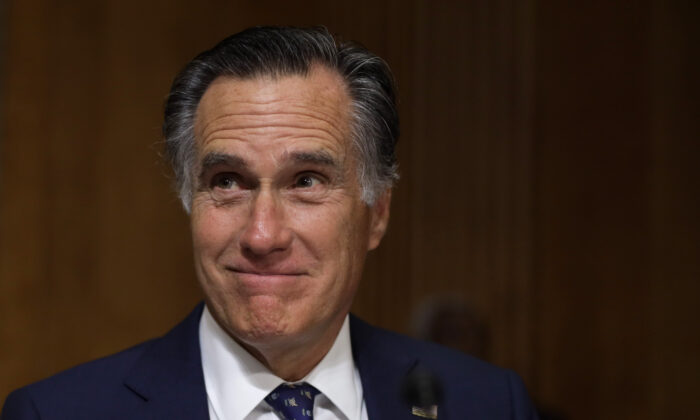 WASHINGTON—Alan Simpson and Erskine Bowles, former co-chairmen of the 2010 National Commission on Fiscal Responsibility and Reform (NCFRR), said on Jan. 8 that they back Sen. Mitt Romney’s TRUST Act to fix ailing federal trust funds like those for Social Security and Medicare.

“While most people in Washington would prefer to put—or leave!—their heads in the sand, the TRUST Act would create a truly bipartisan process to save these important programs,” Simpson and Bowles said in a joint statement Romney made public.

Before their work on the NCFRR, Simpson was a Republican senator from Wyoming, while Bowles was White House chief of staff under President Bill Clinton.

The problem Romney is addressing is stark.

Clinton was in the Oval Office when the federal government last balanced its annual budget. Since then, Congress and presidents have spent trillions more tax dollars than the Treasury Department collected, with most going to pay entitlement benefits like Social Security and Medicare.

The result, besides the $23 trillion national debt, is that trust funds established long ago to ensure future benefits are rapidly disappearing.

Social Security’s combined major trust funds, for example, have less than $3 trillion left and, according to the system’s trustees, will be empty in 13 years.

On the Medicare side, the trust fund backing Part A, which pays for in-hospital treatment, skilled nursing, and home care services, will be exhausted in only six years.

Between them, Social Security and Medicare alone accounted for 45 percent of all federal spending in 2018.

Something has to give—either taxes must be increased to fund benefits or benefits must be reduced. No recent chief executive or Congress of either party has summoned the courage to do either.

The Simpson and Bowles commission, for example, offered multiple recommendations that enjoyed bipartisan support, but President Barack Obama ignored them, while a divided Congress focused on other issues.

Romney knows the history but is determined to push on, saying in an October 2019 floor speech: “This is an effort which has been undertaken in the past unsuccessfully and a lot of people who say, ‘Well, it can’t be done now.’ But it’s got to be done now because, if it’s not done now, the burden that will fall on our seniors eventually will become extraordinary.”

Under the bill, congressional leaders would appoint bipartisan “rescue committees” of senators for each of the troubled trust funds, “with the mandate to draft legislation that restores solvency and otherwise improves each trust fund program,” according to Romney’s office.

At least two members from each party must support a recommendation before it could be sent to the Senate floor for a vote, then as a privileged measure. The House of Representatives would also have to approve it and President Donald Trump sign it for the recommendation to become law.

Maya MacGuineas, president of the Committee for a Responsible Federal Budget (CRFB), is enthusiastic about the TRUST Act’s prospects, but acknowledges it faces obstacles.

“If we don’t take action soon, people are going to feel real pain from our politicians having continued to kick the can down the road,” MacGuineas told The Epoch Times on Jan. 8.

“I think this bill and the broad base of support it has, unlike policies that are just supported by one party, demonstrates a real possibility for members to come together,” she said.

Romney’s bill has support across the ideological spectrum, according to CRFB.

“Congress cannot continue kicking the can down the road. America’s fiscal situation is unsustainable,” Jason Pye, vice president of legislative affairs for the conservative advocacy group FreedomWorks, told CFRB. “The TRUST Act is not a silver bullet, but it is a necessary first step toward addressing the looming fiscal crisis that taxpayers face.”

Similarly, William Gale, senior fellow at the liberal Brookings Institution, said: “Addressing long-term budget shortfalls is going to take many bold actions by our political leaders and the problem is so big that it often seems unclear where even to start. … Addressing the federal trust funds in a bipartisan manner is a promising way to make a down payment on long-term fiscal reform.”

Others are less optimistic.

“If taxes are raised, does that ‘rescue’ the programs? Not if the rest of the government continues to spend the proceeds, as they have in the past,” Bill Bergman, research director for the Chicago-based Truth in Accounting, told The Epoch Times.

Citizens Against Government Waste President Tom Schatz told The Epoch Times that “Congress should be acting to preserve the trust funds without the need to convene another set of commissions, particularly if they end up proposing massive tax increases rather than significant program reforms.”