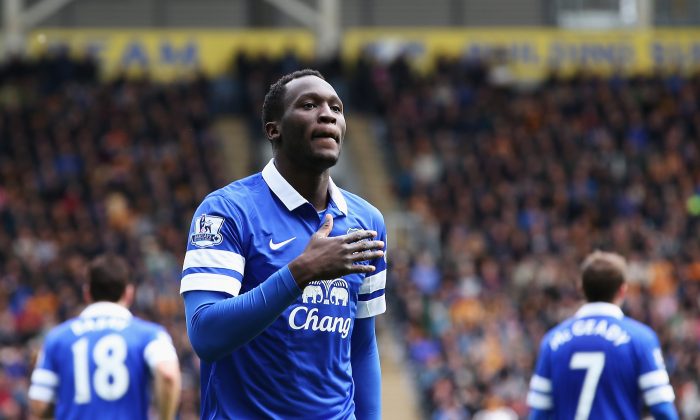 Romelu Lukaku of Everton celebrates his goal during the Barclays Premier League match between Hull City and Everton at KC Stadium on May 11, 2014 in Hull, England. (Photo by Jan Kruger/Getty Images)
Soccer

Is Romelu Lukaku making a permanent move to Everton or to Wolfsburg?

Lukaku, 21, might have signed a contract with Chelsea, but he has barely featured for the Blues in his career.

Instead, the high rated Belgium international has spent the last two seasons on loan to West Bromwich Albion and Everton.

Lukaku’s meandering days could be over soon, however, as Everton manager Roberto Martinez has said that he intends to make a permanent move for the striker.

While with Everton on their pre-season tour in Thailand, Martinez was asked by Everton fans if he would sign Lukaku, and the Spaniard responded “Of course we’ll get him.”

It is uncertain if Martinez was making a tongue in cheek statement, or openly declaring his transfer intentions.

After Everton’s 1-0 lost to Leicester in Thailand on Sunday, Martinez said: “We still need two or three new players.

“We are still a work in progress. You cannot be happy when you lose a game.

“But we need to be realistic. We are in pre-season and we need to work towards being at our best level on the 16th August.”

Wolfsburg and Juventus have also been linked with Lukaku.

“There are a lot of good strikers in England, and for sure Romelu Lukaku is one of them.

“We showed our interest, but the transfer window is open until the 31 August, so a lot of things will happen.

“A lot of rumors about Wolfsburg, and you’ll be one of the first to know if we have our striker.”

According to Sky Bet, Everton are favorites to sign Lukaku at 1/2, with Wolfsburg behind at 15/8.