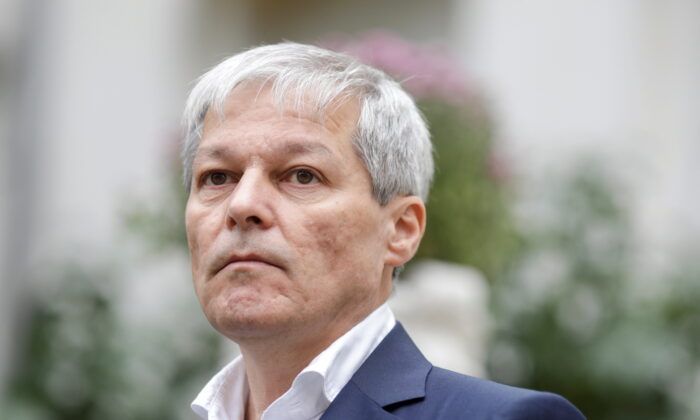 Dacian Ciolos, leader of the USR party, attends a news conference at the headquarters of the USR PLUS alliance, in Bucharest, Romania, on Sept. 23, 2021. (George Calin/Inquam Photos/Reuters)
Europe

Romania, one of the European Union’s poorest states, has been in political paralysis since a liberal-led cabinet was toppled by Parliament on Oct. 5, threatening the economic recovery from the pandemic and efforts to cut twin deficits at a time of rising energy prices.

Under the constitution, President Klaus Iohannis would need to make a new nomination after consultations with political groupings, likely from the ranks of his Liberal party.

“Our party was the sole to have wanted to take responsibility, to govern, at these tough times,” Ciolos told legislators. “We aimed to solve this current health crisis.”

Final ballot data has not yet been released, but a Social Democrat deputy said Ciolos was “at least 140 votes short” of the required threshold to win.

The centrist ruling coalition of caretaker premier Florin Citu collapsed earlier this month after Ciolos’s USR party withdrew its ministers in a row over a regional development fund that also cost Citu’s government its majority.

Should Iohannis’s second nomination also fail to win Parliament’s backing, the president can dissolve the legislature and call an early election, an unlikely scenario as the fragmented opposition is reluctant to take over.

Some pundits say a likely outcome could be a restoration of the previous coalition but with a different prime minister, in keeping with USR’s condition for rejoining a government.