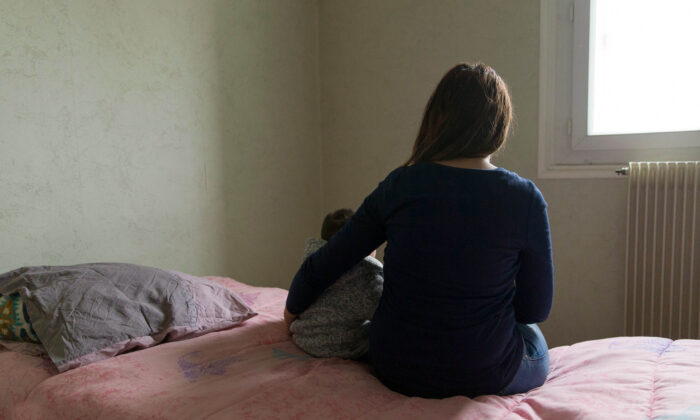 A mother and her child pose in a room in a temporary apartment of the Home Association in Paris on Nov. 22, 2016. Geoffroy Van der Hasselt/AFP via Getty Images
Viewpoints

Romance Can Turn Brutal—Especially for the Children

If you’re the typical U.S. consumer, you just shelled out money to celebrate Valentine’s Day. Collectively, Americans spend multiple billions of dollars each year on candy, flowers, jewelry, or some other gift to spark romance with a loved one.

Historians agree the celebration likely began in ancient Roman times with the mid-February fertility festival called Lupercalia. This involved the toga-wearing men getting naked, sacrificing dogs and goats, and then using strips from the hides to chase down and whip local females. The women voluntarily submitted, somehow believing the beating would improve their fertility. Two days of forced coupling followed.

The holiday has a decidedly ugly origin. And despite today’s display of lacey heart-covered greeting cards, flowers, and candlelit dinners, Valentine’s Day is still often punctuated with brutality.

The National Coalition Against Domestic Violence reports that in the United States, on average, nearly 20 people per minute are physically abused by an intimate partner. That equates to more than 10 million women and men being victimized every year. Casualties are reported across the spectrum, including within heterosexual, homosexual, and transgender relationships. If there is a gun in the vicinity of the incident, the likelihood of a homicide occurring increases by 500 percent. These numbers, as shocking as they seem, are likely underreported.

It’s way too easy to try to diminish the domestic abuse problem by believing adults have free will to get themselves out of dangerous situations. The causes and continuation of domestic violence are massively more complicated than that. There may be cultural, mental, or serious financial reasons the victim stays. Sadly, there are often young children involved, eyewitnesses to the in-home brutality, who also become victims of emotional, physical, and sexual abuse.

As the National Institutes of Health reports, the long-term traumatic effects of domestic violence can be passed down through generations. “The ‘cycle of abuse’ is often continued from exposed children into their adult relationships and, finally, to the care of the elderly.”

Society should worry about curbing domestic violence, if for no other reason than for the children born into it. Studies show these kids are forever harmed after watching Dad terrorize or beat on Mom (or vice versa), and their future problems become the community’s problems. These children often do poorly in school, get into trouble, and pick physical fights. As teens, they may have mental or health problems such as acute depression or headaches and stomachaches. Risky behaviors such as unprotected sex and substance abuse are frequent. Antisocial behaviors impeding their education and job prospects may force them onto public assistance.

At last count, more than 15 million American children live in homes where they have witnessed domestic violence. That’s a lot of future financial issues for all of us to deal with—from welfare and unemployment payments to probation and incarceration costs. The National Institutes of Health calculates the economic burden tied to this violent cycle to be over $12 billion each year.

Dr. Leonard Shengold, a respected psychoanalyst who died last month at age 94, dedicated much of his life to studying the effects of long-term abuse and neglect of children. He concluded that adults who deprive their offspring of a loving home are guilty of “soul murder,” which was the title of one of Shengold’s most quoted books: “Soul Murder: The Effects of Childhood Abuse and Deprivation.”

Through his 60 years of ministering to adult patients who had been variously victimized during childhood, Shengold determined, “The most destructive effect of child abuse is perhaps the need to hold on to the abusing parent” and to identify with the adult’s behaviors.

“This becomes part of a compulsion to repeat the experiences of abuse—as tormentor,” he wrote. There is no legend of Saint Valentine or obscure Cupid that will suddenly make that all better.