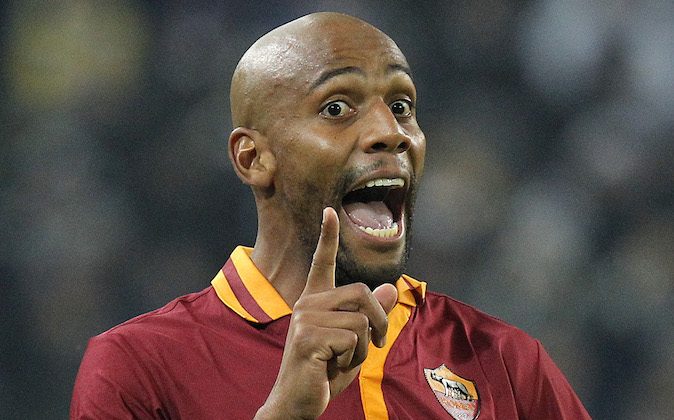 AS Roma defender Sisenando Maicon reacts during the Italian Serie A football match Juventus Vs AS Roma on January 5, 2014 at Juventus Stadium in Turin. (MARCO BERTORELLO/AFP/Getty Images)
Soccer

The game will be broadcast on Sky Calcio 1, Sky Sport 1 HD Italia and Premium Calcio.

The game will also air on beIN Sports USA.

Ciro Immobile scored his first hat trick over the weekend to give Torino a 3-1 win at Livorno and snap a four-match losing streak.

It was the first hat trick a Torino player had scored in 21 years and put Immobile on course to become the first to win the scoring title at Torino since Ciccio Graziani in 1976-77.

The 24-year-old Immobile has also firmly staked his claim for a place in the Italy squad for the upcoming World Cup.

“I would never have believed I would be leading goalscorer if you had told me at the beginning,” Immobile said. “I wanted to show my worth and now I have to continue like this.

“I’ll be ready if (Italy coach Cesare) Prandelli decides to call me up.”