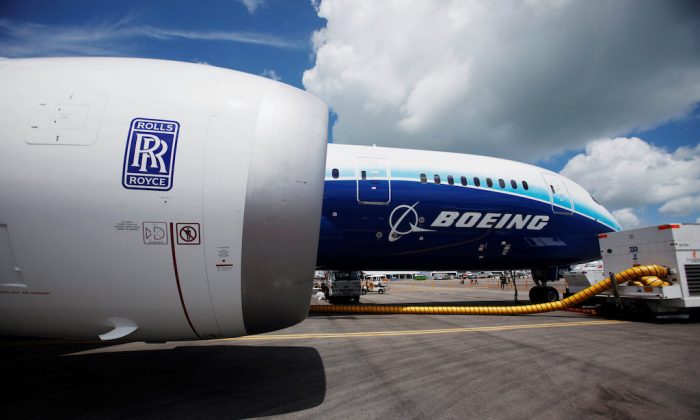 A view of one of two Rolls Royce Trent 1000 engines of the Boeing 787 Dreamliner during a media tour of the aircraft ahead of the Singapore Airshow in Singapore Feb. 12, 2012. (REUTERS/Edgar Su/File Photo)
UK

LONDON—Britain’s Rolls-Royce said a costly compressor problem that had grounded Boeing planes had now been found in a different type of engine, compounding pressures on a group that is due to cut more than 4,000 jobs this week.

Britain’s best known engineering company has been hit by a problem with a compressor in the Trent 1000 package C engine that is not lasting as long as expected, grounding planes, forcing inspections and angering airline clients.

On Monday it said it had now found the same issue on a “small number of high life Package B engines”, requiring a one-off inspection of the B fleet and sending its shares down 1 percent.

The news, which will not affect Rolls’ full-year free cash flow target, comes as the group embarks on the latest stage of a major restructuring program under Chief Executive Warren East that is designed to boost profitability.

On Friday the group will host a capital markets day where, according to a person familiar with the situation, it will announce more than 4,000 job cuts, mostly in Britain and affecting support and management roles.

The group, which employs 50,000 people in 50 countries, is also expected to set out how it will make a return on the investment made in recent years and the expected drivers of cash flow beyond its medium-term horizon.

The news about the compressor issue will not help however as Rolls has been fighting to show it has a lid on a problem which has forced airline customers to lease alternative planes to fly in the busy summer holiday period.

The existing package C issue had led to about 30 of the affected aircraft being grounded at any one time for checks. They were flown by airlines including British Airways, Virgin Atlantic and Air New Zealand.

Air New Zealand said earlier this month it would lease two Boeing 777s to cover for 787-9s that are affected by the Rolls engine issue.

Rolls said that while this new problem would incur some additional cost, it did not expect it to affect its free cash flow guidance for 2018.

Analysts welcomed the fact the group did not revise the target and noted the comment that the package B issue only affected a “small number” of engines.