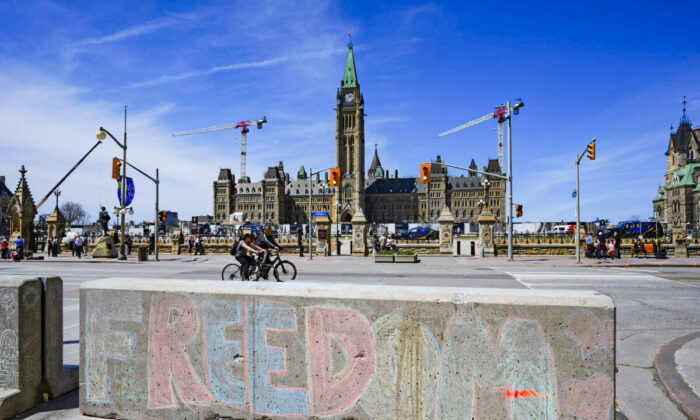 Chalk art asking for freedom is seen across the street from Parliament Hill in downtown Ottawa on May 1, 2022. (The Canadian Press/Sean Kilpatrick)
Canada

OTTAWA—The majority of participants in the Rolling Thunder motorcycle convoy ended their protest in Ottawa by the afternoon of May 1, while the police continue to investigate an act of vandalism at a church where they attended a Sunday service that morning on the last scheduled day of their demonstration in the nation’s capital.

“Police are investigating an incident of hate-motivated Mischief at a religious institution located in the 100 block of Carillon Street that was reported to us just before 7am this morning,” the Ottawa police said in a Twitter post, referring to the Capital City Bikers Church in Vanier, a neighbourhood a few kilometres east of downtown Ottawa.

The words of “no haven for fascism” were painted on an exterior wall of the church.

The church was filled to full capacity, according to Live From the Shed, a Twitter account linked to the Rolling Thunder event organizer. A livestream of the pastor’s sermon was provided online.

Mirial Bartley, a Biker Convoy supporter who was at the church service, told The Epoch Times that the vandalism has harmed the community and is counter to what the Rolling Thunder event hopes to bring.

“Deception that has created confusion, has created hate, has created division—that’s not what this [event] is about. We offer love and hope to everyone. We don’t hate anyone. We’re not fascist. We just want an end to the mandates,” Bartley said.

“I want the government to stop its overreach.”

Stephany Crowley, who comes from a family of veterans, said she joined the event to support the veterans who she believes have not received enough support from the government.

“I just think that whatever you believe, one way or another, everyone, every veteran needs support and deserves support. At the end of the day, they paid with blood, sweat, and tears for the freedoms that we enjoy here in this country,” Crowley said.

Several thousand participants and supporters of the motorcycle convoy arrived in Ottawa on April 29 as part of a wider movement calling for personal freedoms.

On April 30 just before noon, the convoy, consisting of some 350 motorcycles, drove past the area near the National War Memorial downtown, following a city-designated route, to pay homage to veterans who had sacrificed their lives for the freedom of Canadians.

More than 1,000 people were assembled there at the War Memorial for a service that began around 10 a.m., organized by Veterans for Freedom, a group of retired regular force and primary reserve Canadian Armed Forces members.

Another convoy supporter who was at the church, who only wished to be identified as Elizabeth, said she is from Toronto and that she came to Ottawa to honour all of the veterans who fought for Canadians’ freedom and to push back against COVID-19 mandates and restrictions.

“I think it’s a crime to have sent these young men and women to fight for freedom, just to restrict the mobility and movement [today]—not just the 6 million Canadians who still can’t board an airplane or train, but restricting the movements of Canadians through the last two years of lockdown,” she told The Epoch Times.

Heavy police presence was seen among the peaceful crowd throughout the three-day rally.

Between 7 a.m. on Friday, April 29, and 8:30 a.m. on May 1, police issued 761 parking tickets related to the protest and 10 tickets for offences such as noise, smoking, and encumbering the highway. Municipal bylaw action taken since Friday morning also include several arrests and 39 vehicles towed.

Police said in an evening news release on April 30 that one woman was arrested “for assaulting police on Elgin St. midday,” a man was arrested for “breaching conditions” related to the trucker convoy protests earlier in the year, and a male driver was arrested “after rushing an [Ontario Provincial Police] motorcycle at a checkpoint.”

The Rolling Thunder event follows the weeks-long trucker convoy protest in February that called for the removal of COVID-19 mandates and restrictions.