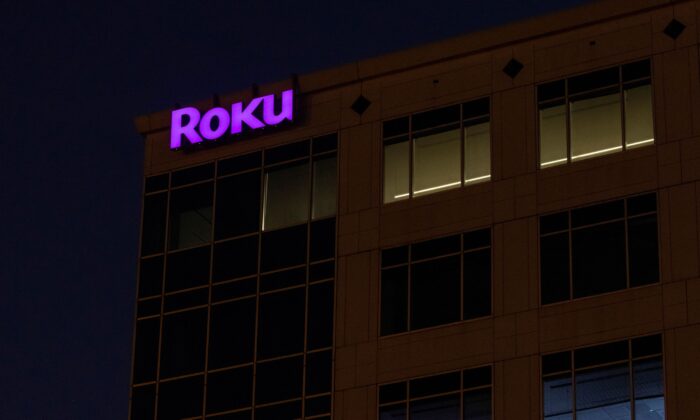 The Roku company logo is displayed on a building in Austin, on Oct. 25, 2021. (Mike Blake/Reuters)
Companies

Roku reported fourth-quarter revenue of $865.3 million, up 33 percent year-over-year. The total missed a consensus estimate of $894 million, according to Benzinga Pro. Earnings of 17 cents per share beat the estimates by 10 cents.

The company reported platform revenue of $703.6 million, up 49 percent year-over-year. Player revenue was $161.7 million in the fourth quarter.

Roku ended the quarter with 60.1 million active accounts. Average revenue per user was up 43 percent to $41.03.

For the full fiscal year, Roku reported revenue of $2.765 billion, up 55 percent year-over-year.

“2021 was another strong year for Roku, as we achieved record revenue, gross profit, adjusted EBITDA and ARPU,” the company said.

Customers streamed 19.5 billion hours of content on Roku in the fourth quarter, up 15 percent year-over-year.

The company’s The Roku Channel had a record year, reaching over 80 million households in the fourth quarter. The channel’s streaming hours doubled in 2021.

Roku launched content from Quibi as Roku Originals and also created its first feature film “Zoey’s Extraordinary Christmas,” which was the number one on-demand title on The Roku Channel in the fourth quarter.

Roku points to all television content and advertising being done on streaming in the future. The company believes it has competitive advantages with the Roku operating system, The Roku Channel, and its advertising platform.

“We believe The Roku Channel has a significant growth opportunity ahead and FAST was the fastest-growing segment in TV streaming, doubling year-over-year in the U.S. in Q4,” the company said.

Roku provided first-quarter revenue guidance, with a range of $720 million to $748.5 million.