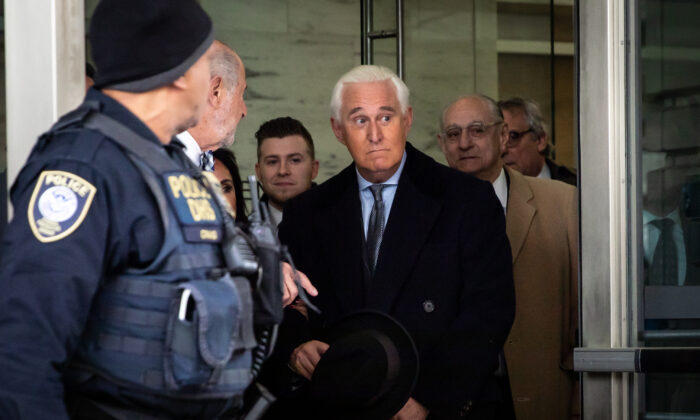 After Stone’s lawyers filed a motion to dismiss the appeal with the U.S. Court of Appeals for the District of Columbia Circuit on Monday night, Stone wrote on his website that he “reluctantly decided” to end the bid to overturn what he believes are wrongful convictions.

“Based on their previous actions in my case to date and based on their recent actions in the [Michael] Flynn case … it would be impossible for me to ever get a fair hearing from this appellate court for the vitally important, fundamental constitutional issues my case raises,” Stone wrote.

Even if he won his appeal, the resulting new trial would go before the same judge, who Stone has accused of being politically biased.

U.S. District Judge Amy Berman Jackson, an Obama-nominee, “has proven over and over again in my case that she simply cannot and will not ever permit me to have a fair trial in her courtroom,” Stone alleged.

“I regret not going forward with the appeal to fully expose all that happened, with the hope that by doing so, I could help prevent it from happening to anyone else ever again; but I had to decide based on what is best for me and my family,” he concluded.

Stone told The Epoch Times on July 14 that he wasn’t sure whether to appeal the convictions because he’d face Jackson again.

Jackson twice denied Stone a new trial, even when his legal team presented evidence that the jury forewoman had made social media posts against Trump.

Jackson said the claim that the forewoman was tainted by political bias “is not supported by any facts or data and it is contrary to controlling legal precedent.”

Trump commuted Stone’s sentence in July, just before Stone was set to start his jail sentence.

“He was treated very unfairly, as were many others in this case. Roger Stone is now a free man!” Trump said in a statement.