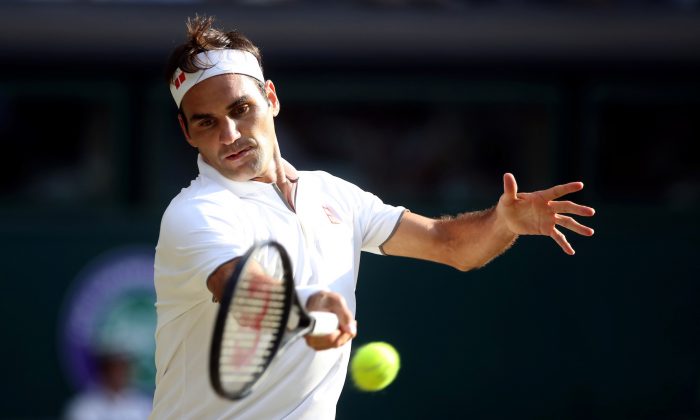 Switzerland's Roger Federer in action during his semi-final match against Spain's Rafael Nadal at Wimbledon in the All England Lawn Tennis and Croquet Club, London, Britain, on July 12, 2019. (Carl Recine/Reuters)
Sports News

LONDON—Even for the two players vying for the title of GOAT (Greatest of All Time) it was perhaps greedy to expect them to produce a blockbuster to compare with their previous duel at Wimbledon.

They are human after all.

No one was complaining though as Swiss great Roger Federer produced a vintage display to beat old adversary Rafael Nadal 7-6(3) 1-6 6-3 6-4 and reach his 31st Grand Slam final and 12th at the All England Club he has claimed as his own backyard.

Unlike the 2008 final, widely regarded as the greatest ever at Wimbledon, when claycourt king Nadal snapped Federer’s five-year reign in a five-set epic ending in near darkness and a blaze of flashbulbs, Friday’s match was less damaging to the fingernails of those rooting for each man.

The 40th chapter of their rivalry, the third-most prolific in the professional era, was compelling enough though.

There was barely a cigarette paper between the two gladiators in a high-quality opening set crackling with tension.

Then, at the climax to the match, Nadal, fighting as only he knows how, threatened to ambush Federer’s quest for a record-equalling ninth Wimbledon singles title by saving four match points before Federer took his place in Sunday’s showpiece.

Federer, who will be 38 next month, is the oldest men’s singles finalist since Ken Rosewall in 1974 and will now face old foe Novak Djokovic, the top seed and holder, seeking to avenge his losses to the Serb in the 2014 and 2015 finals.

The effervescent Swiss will need to reproduce the kind of all-out attacking tennis that allowed him to dominate Nadal, apart from a 36-minute second-set capitulation.

Federer struck 51 winners as the Spaniard suffered a second successive Wimbledon semi-final defeat, having fallen fractionally short to Djokovic in a classic a year ago.

“I’m exhausted. It was tough at the end,” 20-time Grand Slam champion Federer, who beat Nadal for only the fourth time in their 14 clashes at majors, said after receiving a standing ovation from his adoring Centre Court fans.

“Rafa played some unbelievable shots to stay in the match. The match was played at a very high level. It was a joy to play today. I hope I can push (Djokovic) to the brink and hopefully beat him but it’s going to be very difficult.

The 33-year-old Nadal was understandably deflated. Having won his 12th French Open title last month, he had looked fired-up to win his third Wimbledon crown and first since 2010.

“I had my chances but he played a little bit better than me,” said the third seed. “He played aggressive, he played a great match, well done. I think at the end of the match I started to play much better, no? But was late.”

Half an hour after Djokovic had battled past Spaniard Roberto Bautista Agut, fans flocked back to their Centre Court seats and the giant screen on ‘Henman Hill’ to witness a duel that had been on the cards from the moment number two seed Federer and Nadal were placed in the same half of the draw.

Only five points went against serve in the first seven games as the two gladiators settled into their groove.

It took a tiebreak to separate them with Federer taking five points in a row to grab the first set—prompting Nadal to disappear for a bathroom break.

The second was a complete contrast as Federer lost focus and Nadal, who has won 18 majors, levelled the match in 36 minutes.

Federer’s fans need not have fretted though. He won a close-quarters exchange to break for 3-1 in the third, then battled back from 15-40 in the next game, winning a ferocious 25-stroke rally on the way to consolidating his advantage.

Two more service holds put him within a set of victory and the Swiss turned the screw in the fourth set as Nadal faded.

The Spanish warrior was never going to slink away without a fight though. He clung on at 3-5, saving two match points, then had a break point as Federer served for the match.

The ice cool Swiss fended that off, then unloaded everything in his arsenal at Nadal in two more match points, only to have victory snatched away by two sublime winners off the indefatigable Spaniard’s racket.

A fifth match point arrived and this time Nadal swung a backhand over the baseline and Federer pumped his arms above his head to celebrate, with David Beckham echoing most people’s thoughts as he mouthed “unbelievable” in the Royal Box.