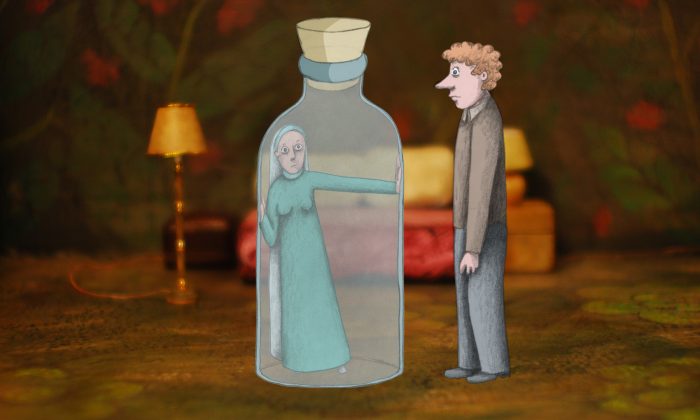 A scene from “Rocks in My Pockets,” an animated family history of depression by Signe Baumane. (Zeitgeist Films)
Entertainment

‘Rocks in My Pockets’: Depression and Talent Run in the Family

Perversely, the Soviet occupation of Latvia probably saved the life of animator Signe Baumane’s grandmother, Anna, at least temporarily. The resulting privations and exploitation provided a distraction from the depression and suicidal impulses that plagued her all her life. Combining art and therapy, Baumane chronicles the mental health trials of the women in her family, culminating with her own struggles in “Rocks in My Pockets.”Baumane’s father and his seven brothers and sisters revere their sainted mother, but Baumane slowly pieces together a darker story. She was such a bright young girl that her father saved and even borrowed to send her to college, making Anna one of the few women in 1920s Latvia with an advanced education. Unfortunately, the only job she found after graduation was as the secretary to the entrepreneur who would become Baumane’s grandfather.Initially, Anna was in awe of his erudition and sophistication, but his jealous, controlling side quickly surfaced after their marriage. Instead of living a life of cosmopolitan glamor in the city, Anna dutifully followed her husband into the forest, where he established a turpentine factory. Unlike many of his schemes, it was relatively successful until the Soviets invaded, nationalizing it and everything else in their wake.With eight mouths to feed, Anna rouses herself from her depression, navigating the life-and-death challenges posed by the Soviets, the Germans, and then the Soviets again. In fact, the Communists never stopped shaking down Anna and her family, confiscating their provisions when they are on the outs as partisans, just as they did when they were conquering oppressors.Needless to say, Soviet psychiatric care was not exactly scientifically or socially progressive, either. It was mostly just about doping patients up, locking them up, and stigmatizing them thereafter, as Baumane learns firsthand. In between, she revisits the sad history of many lost relatives, reading between the lines.Even if it is animated, a film about depression sounds rather depressing, especially when a good portion of it is set during the Communist era. However, Baumane’s animation is quite striking, often taking viewers down surreal, symbolically resonant rabbit holes, and her message is also empowering and ultimately upbeat. In fact, the closing lines are absolutely unforgettable.Yes, there is a prescriptive element to the film (tragically timely in the wake of Robin Williams’s death), but animation enthusiasts can enjoy it simply on a visual level. While Baumane tips her hat to Bill Plympton and Jan Svankmajer, her hand-drawn figures and backgrounds often bring to mind the work of Sally Cruikshank (although they are somewhat less colorful, perhaps reflecting the subject matter and setting).Clearly, “Rocks” is a very personal film, but Baumane’s family experiences offer a highly relevant and accessible perspective on the greater realities of depression and even 20th century Latvian history. She convincingly makes the sort of jump from the private to the universal that Barabara Kopple’s glitzy, self-helpy “Running from Crazy” miserably failed to pull off. Highly recommended for fans of animation and those who appreciate its message, “Rocks in My Pockets” is playing in New York at the IFC Center.Joe Bendel writes about independent film and lives in New York. To read his most recent articles, please visit www.jbspins.blogspot.com