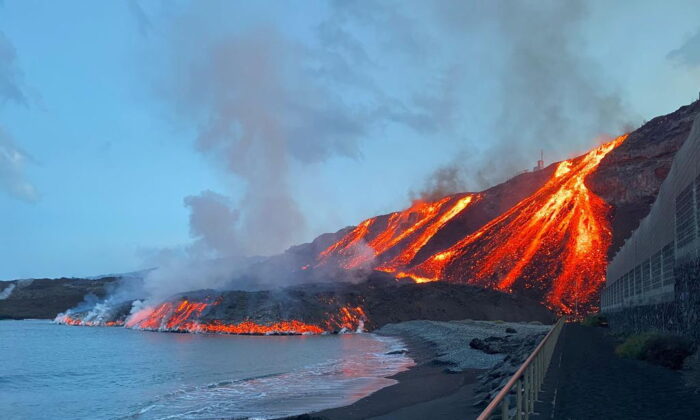 MADRID—New cascades of red-hot lava tumbled into the Atlantic Ocean off Spain’s La Palma on Wednesday morning, sending up plumes of white smoke and extending a platform of volcanic rock created by earlier flows.

The stream of molten rock from the Cumbre Vieja volcano, which began erupting in mid-September, reached the water near the popular surf spot of Los Guirres beach just before 2 a.m, according to the Transport Ministry.

A video uploaded by Spain’s Geology and Mining Institute showed rivers of molten rock sliding into the sea and large rocks rolling down a cliff, causing a cone of debris to emerge from the waterline.

Unlike the first time lava reached the ocean—just over a month ago—authorities said there was no need for residents to stay indoors.

“New confinements are not necessary because the populations are far away from the point of contact with the sea that occurred last night,” an emergency services spokesperson told Reuters.

Few people live in the affected area, which is mostly banana plantations.

Early on in the eruption authorities had feared that the reaction between the superheated lava and seawater could unleash powerful explosions and set off toxic gas clouds.

During the last major eruption on the island, some 50 years ago, a man died after inhaling such gases.

La Palma’s council said on Tuesday that seismic activity around the eruption site, as well as emissions of toxic sulphur dioxide, had been decreasing and the air quality remained good across most of the island.