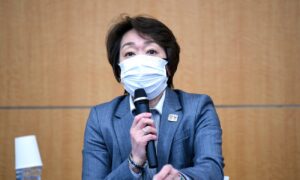 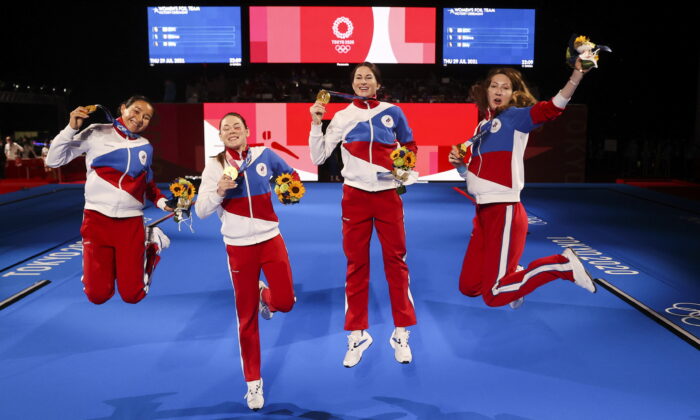 CHIBA, Japan—The Russian Olympic Committee (ROC) cruised to victory in the women’s foil team event on Thursday, beating France in the finals at the Tokyo Games.

Ranked number one in the world, the Russians slowly and steadily opened and extended their lead over the French, eventually winning the match at 45–34.

That was despite Marta Martyanova receiving medical help, when she appeared to have sprained her ankle during one of her bouts.

She played on for her team, however, telling reporters after the match that she had tried to block out the pain, with her arm wrapped around the shoulder of a team mate who was supporting her.

The final bout came between top-ranked Inna Deriglazova of the ROC and France’s Ysaora Thibus, who had come fresh off a breathtaking upset victory in the semifinals after being tied 42–42 with Italy.

Deriglazova and Thibus warily eyed each other across the piste and lunged repeatedly throughout, with Thibus landing some successful swipes at her opponent’s torso. But it was Deriglazova who eventually took the winning 45th point.

She let out a cry and swept off her mask in one motion, as her team mates rushed to crowd around her, with the exception of Martyanova, who had to hobble over to celebrate the win.

“It was a really tough bout, we knew it. I think we could have done a better start… when they have the lead it’s really difficult to move them and come back out of it,” Thibus said.

“They really did a great bout so they deserve it today,” she added.

Italy won the bronze medal bout against the United States, becoming the first country to win seven consecutive medals in the women’s team foil Olympic competition. They were previously tied with the Soviet Union and Hungary on six consecutive medals.