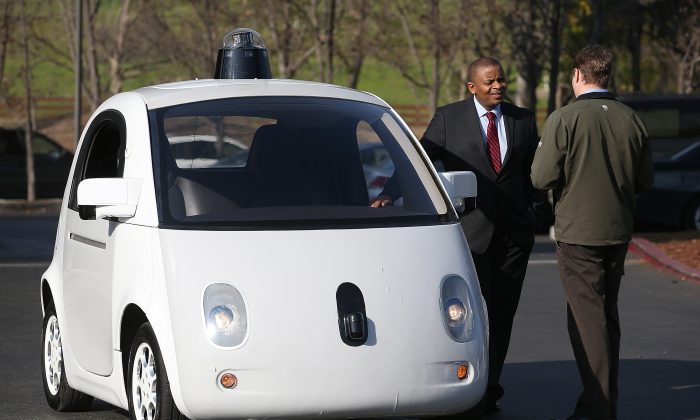 Is Canada ready for the automated future when self-driving cars and robots take half of today's jobs?
By Matthew Little

PARLIAMENT HILL—The future is racing toward us, and no one is driving.

Driverless cars are among the first wave of new disruptive technology that will change every facet of our society. Virtual reality, autonomous robotics, and countless other technologies will arrive in short order, but are we ready?

Nearly half the jobs of today are up for automation within 20 years or sooner, according to an Oxford University study. At this point, the federal government can’t say how it is preparing.

Self-driving cars will arrive within two years. They’ll be able to handle highway driving in some weather conditions. Within five years, fully autonomous vehicles (AVs) will be on the roads in some jurisdictions. By 2030 they could outnumber cars with human drivers.

This means that in Canada, some 560,000 professional drivers will be out of work, notes a recent Conference Board of Canada report.

While the opportunities of new technology are being widely touted, the question becomes what happens to those who can’t adapt.

The Conference Board predicts AVs will give the economy a $65 billion boost by saving Canadians 5 billion hours of driving time, reducing collisions, and cutting congestion on the roads.

Car ownership could change dramatically as millennials, who are already disinclined to buy cars, have a cheaper option. While the taxi industry faces its demise at the hands of Uber, Uber drivers, who complain of meagre earnings, face their end with the arrival of AVs.

Those out-of-work drivers could soon be joined by the majority of people working white- and blue-collar jobs at the lower end of the ladder.

No one really knows exactly where this technology is all going.
— NDP industry critic Peggy Nash

A 2013 Oxford University study, “The Future of Employment,” examined 700 job types in the U.S. (nearly identical to Canada) and found nearly half could be computerized within around 20 years. The first wave of automation includes AVs replacing many transportation and logistics jobs. White-collar jobs are no safer, either.

“The bulk of office and administrative support workers, and labour in production occupations, are likely to be substituted by computer capital,” reads the study.

Big data, able to analyze complicated routines and find patterns, will even computerize legal writing, the study predicts. Where machines and robots take giant chunks out of the middle-class job market, computerization will lop off the lower-paying jobs left behind.

The impacts of this imminent upheaval are hard to predict given uncertain timelines, but some governments, including that of the U.S., have put resources into persistent forecasting of disruptive technology. In Canada, some federal government departments do some forecasting, but there isn’t a broad interdepartmental effort to forecast disruptive technology, though Industry Canada says it is paying attention.

The National Research Council is more involved in predicting and preparing for disruptive technology through its emerging technologies division, but could not provide someone to speak to the topic by press time.

The trendlines are already well established. Robotics and international competition will put increasing pressure on Canadian firms to cut costs and automate jobs.

Minister of State for Science and Technology Ed Holder declined immediate comment on what role government has dealing with these changes.

In most cases, the impacts of disruptive technologies would need to be handled on a case-by-case basis, but with widespread automation imminent, a holistic approach seems appropriate.

NDP Industry critic Peggy Nash said the pace of change makes it difficult to come to grips with the implications of new technology, be it on privacy, jobs, or the broader society.

It’s a reality that we are all going to have to face.
— Peter Wallis, Van Horne Institute

“No one really knows exactly where this technology is all going, but it has the potential to dramatically change the way we interact as people and the way we run our economy,” she said.

Nash said governments focus on the problems before them, areas that need laws or regulation today, not so much what might need regulation tomorrow. Evidence of that comes from the fact that Transport Canada is taking a wait-and-see approach to automated cars.

The Conference Board has called for a more proactive approach by governments at all levels to pave the way for AVs and incorporate their pending arrival into infrastructure projects now being planned.

“They must begin to understand how profoundly AVs will impact their cities and Canadian society,” reads the report, released last month.

“This report is a clarion call for Canadians to begin to appreciate what is about to happen to them.”

Peter Wallis, the president and CEO of the Van Horne Institute and a contributor to the report, says he hopes the government is taking a high-level look at technological disruption, including widespread automation.

“It’s a reality that we are all going to have to face,” he said.

He suggested individual government departments could regularly share their forecasts to create a wider understanding of what’s on the horizon and create legislation and regulations to let the new technology flourish.

Something similar to this happens to a limited degree within the Privy Council Office, but Industry Canada couldn’t describe a more formalized process that would seem to fall within its mandate.

That said, the government has been very aware of the competitive threats Canada faces. Industry Canada’s 2014 technology strategy “Seizing Canada’s Moment” lays out in broad strokes how Canada can capitalize on technological change, including investment in research and development and training Canadians for the jobs of tomorrow.

Companies will rely more on expensive capital investments like robotics and less on human labour, which could contribute to an overall decline in jobs.

Nash says it is a long-standing trend that raises questions about how we use technology.

“Robotics and manufacturing could have been used to give people greater leisure time, which was the expectation a generation ago,” she says. “But instead what we have seen is a huge disruption in the workforce where the benefits have not been shared equitably.”

The growing gap between the rich and the poor has come as manufacturing jobs give way to lower-paying service jobs which will soon be obsolete.

What comes next for those who don’t have the education or entrepreneurial know-how to adapt?

Amazon—a leader in the new economy of doing more with fewer people, including using unmanned delivery drones when the U.S. Federal Aviation Administration inevitably approves the plan—has given one possible preview.

Amazon’s Mechanical Turks has been operational since 2005, a crowdsourcing job market where workers take on piecemeal work like filling out surveys, cropping photos, or transcribing receipts for pennies apiece. Turkers, as they are called, come from all around the world. Those in North America have a hard time even making the minimum wage, though Turkers in poorer countries may find those earnings very appealing.

With free trade agreements now including trade in services, the experience of Turkers could be a preview of bottom-tier jobs of the future.

Rise of the Individual

But there is an upside for those who can adapt.

It’s the kind of specialized manufacturing company impossible a generation ago.

Kanter sees a polarization afoot. That gap between the rich and the poor will continue to grow and as the lower and middle parts of the job spectrum are automated, engineers and others who adapt to the new order will have a greater impact.

People like Kanter, who can see and act on opportunity, can leverage all that cheap automation and online ability to create businesses easier than ever. And for creatives who can find an audience, they can reach an entire world, working collaboratively with other creatives and crowdfunding their productions.

“A person today is more amplified than they have ever been before,” he said.

Kanter suggests people should be learning to write computer code as a commonplace skill, and likely learning other spoken languages as well.

“I think for someone that wants to be productive and make an impact on the world, there has never been a greater opportunity than today.”

And for those who can’t quite catch the wave, life might not be so bad, in Kanter’s view at least.

They might live in a tiny rundown apartment but not care that much, says Kanter, thanks to another disruptive technology that will upend existing business models—virtual reality.