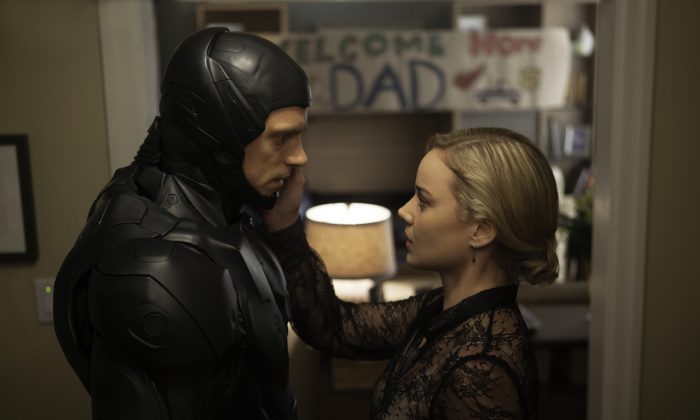 ‘Robocop’ Remake: Only the Armor Is Better

What is Robocop? He’s a quadriplegic Ironman without the rocket-booster. And both Robocop and Ironman are basically Terminators with human consciousness.

We live in cyborg-ian times. As moviegoers, we’ve learned the whole range of robot-human combinations. Also zombies. Encompassing the zombie element would go beyond the scope of this review.

This business of melding humans and bots—there’s always lots of death involved. What about Robodoc? What about Iron-farmer? Who will make those movies?

Nobody! Why not? Because Robocop and Ironman are suits of armor. Armor equals war and death. Every kid knows that. Suffice it to say, Robocop 2.0 is a better suit of armor than the original, but a lesser movie.

Alex Murphy, played by Joel Kinnaman, is a Detroit cop. He gets blown up. They stick his face and brains in a robot. Now he’s Robocop.

It’s a real bad-boy bot-bod. As mentioned, it’s better than the original’s bot-bod. Cooler. It’s tactical black, with more metal muscles. Looks strangely familiar. Where have we seen it before? The Bat-suit? Ironman? Idris Elba’s suit in “Pacific Rim?” Yes.

Problem is, in the future, the American public dislikes drones (sound familiar?) So while combat-bots are okay for foreign-soil warfare, we don’t want soulless drone-y techno-gizmo stuff in an American law-enforcement situation.

What to do about bots-as-cops?

Because a bot’s gotta feel something! Gotta have some human morality!

Testing him out, however, they find Alex’s human emotions short-circuit tactical decision-making (duh). So Dr. Norton re-circuits his brain to follow software at the flick of a switch—the illusion of free will! Omnicorp is omnipresent and omnipotent.

New story same as the old story—Murphy’s humanness overrides the override, and soon he’s hell-bent on arresting his own murderer.

Similar to the chameleon-like talent of Chinese director Ang Lee, who creates American scenes better than American directors, Dutch director Paul Verhoeven had a big hit with the original ‘Robocop’ in 1987.

Like all good movies, it had atmosphere. It created a tangible, very American urban world that combined explosive violence with witty satire.

The remake is slicker, but the original’s storytelling was more riveting, grittier, and funnier.

This rehash-retread needed to have more and cooler suit stuff, which is also why Robocop will always be the poor man’s Ironman.

Take for example the scene from the original, where Robocop notes an opponent standing behind him. Coolly scanning the triangulating, vectoring readout on his facemask LED, and without turning around, he drops the bad guy with a triple-ricocheting bullet like a Fats Minnesota billiard-shot. That’s good stuff!

Instead, they kept the creepy stuff, where you get to see how little is left of the human element. In both movies this scene is eerie, but the remake’s take is downright obscene.