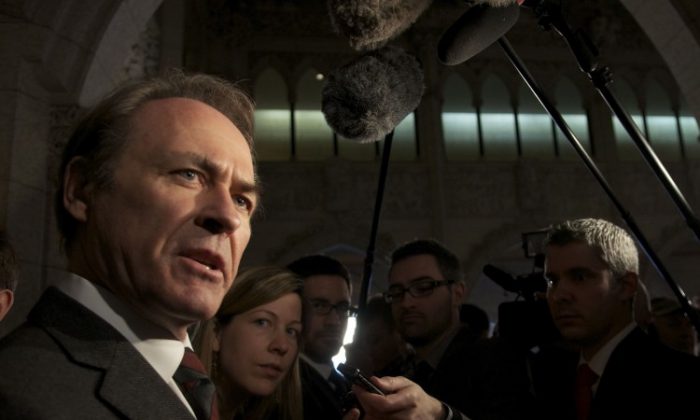 NDP House Leader Joe Comartin tabled a motion calling for all MPs to provide Elections Canada and the RCMP with all information they have on voter suppression and illegal phoning during the last election. (Matthew Little/The Epoch Times)
US

PARLIAMENT HILL—Parliament is in the grip of what opposition MPs describe as the biggest election scandal in Canadian history.

Daily revelations in the ongoing “robocall” affair continue to torque up the rhetoric during question period in the House of Commons while Canadians try to keep up with the ever-evolving issue.

Days before last May’s election, calls in Guelph, Ontario, purporting to be from Elections Canada, told voters their polling stations had changed, according to documents from the Elections Canada campaign obtained by reporters.

Now reports are coming in daily of fraudulent or harassing phone calls made during the election, and the NDP as well as Green Party leader Elizabeth May are calling for a public inquiry into the issue.

The Conservatives appear ready to concede that something went wrong in Guelph, but are putting up an increasingly fierce defence against allegations of widespread abuse.

Below is a timeline of events so far.

Canadians vote in the 41st General Election. Scattered reports come in of misleading automated phone calls directing voters to go to the wrong polling station supposedly at the direction of Elections Canada.

Elections Canada issues its Report of the Chief Electoral Officer on the election and notes it is dealing with 1,003 complaints, and that the commissioner is investigating “crank calls designed to discourage voting, discourage voting for a particular party, or incorrectly advise electors of changed polling locations.”

Liberal MP Irwin Cotler rises for the second time in the House to press his case that calls currently happening in his riding were claiming he was going to step down as MP, thus undermining his work in the House. The calls were made for the Tories by research firm Campaign Research.

House Speaker Andrew Scheer ruled he has no power to deal with Conservative phone calls into Cotler’s riding, but described the tactic as “reprehensible.”

Stephen Maher of Postmedia News and Glen McGregor of the Ottawa Citizen report Elections Canada has traced fraudulent calls during the election to RackNine, an Edmonton call centre that worked on at least nine Conservative candidates’ campaigns. The automated calls claimed to be from Elections Canada telling voters their polling station had moved.

The report notes Elections Canada and the RCMP are investigating the calls while the Conservatives conduct an internal probe. The Conservative Party denies knowledge of the calls, which were launched through a burner cellphone with a 450 area code from Joliette, Quebec.

RackNine CEO Matt Meier denies he knew of the calls before Elections Canada contacted him in November.

The Citizen-Postmedia investigation found that calls misdirecting voters were also reported in several ridings across the country, possibly because of robo-dialling errors.

Speaking to reporters during a trip to Iqaluit, Prime Minister Stephen Harper denies any knowledge of the calls and says anyone responsible will face the consequences.

The NDP asks the Commissioner of Canada Elections for a full investigation into “dirty tricks” during the 2011 General Election.

The Conservative Party issues a statement denying any connection.

The party also pledges if anyone from a local campaign is involved they will not play a role in future campaigns.

Sona was Guelph Conservative candidate Marty Burke’s communications director during the election. He made headlines for allegedly grabbing a ballot box at a University of Guelph polling station that the Tories said was unsanctioned.

Liberal leader Bob Rae writes to Scheer calling for an emergency debate of the robocalls issue.

The Liberals release a list of 27 ridings where they received reports of misleading or harassing phone calls or other tactics used to prevent likely Liberal voters from voting.Rae rejects the suggestion that Sona could have acted alone given the number of ridings involved.

The NDP writes to the Elections Commissioner with an updated list of nine ridings where NDP candidates were bullied by harassing calls from callers posing to be with the NDP campaign.

Parliament resumes after a break week. Harper faces his first question period since the scandal broke. He answers questions from NDP leader Nycole Turmel about the calls by suggesting the NDP turn any information over to Elections Canada.

Scheer rejects Rae’s call for an emergency debate because the matter is being investigated by Elections Canada.

MPs unanimously support a motion tabled by NDP House Leader Joe Comartin calling for all MPs “to provide Elections Canada and the Royal Canadian Mounted Police with any and all information they have on voter suppression and illegal phoning during the last election.”

The Toronto Star reports that callers working for Responsive Marketing Group Inc.’s call centre in Thunder Bay on behalf of the Conservative Party directed voters to new polling stations that “made no sense,” according to one employee.

The Conservative Party told the Star it may have inadvertently misdirected its supporters.

McGregor and Maher publish another article based on interviews with dozens of campaign workers that identified 14 ridings, “mostly closely fought electoral districts in southern Ontario” where voters said they had received fake live calls.

Question period intensifies as Harper goes on the offensive against the NDP, saying the NDP has no credibility to make allegations of fake calls because of a call campaign they carried out against Saint-Maurice-Champlain MP Lise St-Denis who left the NDP in January to sit as a Liberal.

Sona issues a statement to CTV saying he had no involvement with the calls and resigned only because of negative media coverage.

Maher and McGregor report that the burner phone behind the robocalls in Guelph was registered to Pierre Poutine, on Separatist Street, in Joliette, Que.

Twitter immediately blows up with humorous comments tagged #PierrePoutine. “Good gravy! What curd possibly be at the bottom of this greasy scandal?”

The National Post reports the new tally of 57 ridings that reportedly received robocalls from updated NDP and Liberal lists.

Rae tells reporters he is concerned Elections Canada may not have the resources to fully investigate the call complaints.

Harper takes a harder line against the opposition during question period on Wednesday and categorically denies his party had any role in scandal.

“The honourable leader of the NDP should provide her party’s information to Elections Canada. Otherwise, I think we just conclude this is simply a smear campaign without any basis at all.”

CBC reports that Elections Canada will interview employees of a Response Marketing call centre in Thunder Bay in what may be a widening of the investigation.