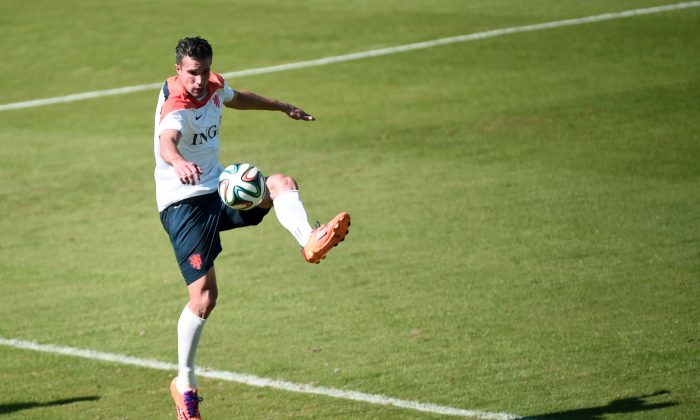 According to the Daily Mail, the Dutchman left training on Tuesday with his left thigh “heavily taped.”

There has been no official confirmation that van Persie is injured, however, and he should still be in line to start against Costa Rica on Saturday’s quarter final game.

Van Gaal: More of the Same From Costa Rica

He expects the same result, too.

But he is unlikely to change a formula that defeated Chile and Mexico — defending solidly and looking to strike on the counterattack. And if that doesn’t work, switching to a 4-3-3 formation and pushing forward in search of a goal.

Van Gaal added that the quality of the Costa Rica players was “different” to the star-studded Chile lineup, but that does not mean that his team will be taking for granted a team that shocked the tournament by winning a group that also featured three former champions — Italy, England and Uruguay.

“We should not underestimate Costa Rica at all. I think it’s going to be a very tough match,” injured midfielder Nigel de Jong said. “Costa Rica got here with a lot of passion and belief and, of course, they’re playing without pressure so we should not take them lightly.”

Even if Costa Rica manages to score first, Van Gaal is confident his resilient team can battle back from a goal deficit as it has three times already in Brazil — against Spain, Australia and Mexico.

“If we are a goal down, we will know that we have corrected that situation three times already at the tournament so we can be confident,” Van Gaal said.

The winner goes to Sao Paulo to play either Argentina or Belgium in the semifinals on July 9.

The Netherlands has fond memories of Salvador. Saturday’s quarterfinal comes at the stadium where the Netherlands kicked off its campaign in Brazil with a stunning 5-1 victory over Spain that signaled the beginning of the end of the defending champion’s reign.

“We have always said we’re a tough team to beat,” Van Gaal said. “We’re not a fantastic team, but we’re very hard to beat. So far we’ve shown that and I hope we can keep it going up to and including the final.”

The Dutch will be without their inspirational midfield enforcer Nigel de Jong, who tore a groin muscle early in the 2-1 second-round defeat of Mexico and could have played his last match at this World Cup. Another midfielder, Leroy Fer, is also still recovering from a hamstring strain and is unlikely to be fit.

Even so, Van Gaal, who leaves the Dutch team to manage Manchester United after the World Cup, suggested he expects to reach at least the semifinal.

Asked by a Dutch youth broadcaster about an arm band he has been wearing during games in Brazil, Van Gaal said with a smile that he would wear it “as long as I’m the Dutch coach — and that is three more matches.”