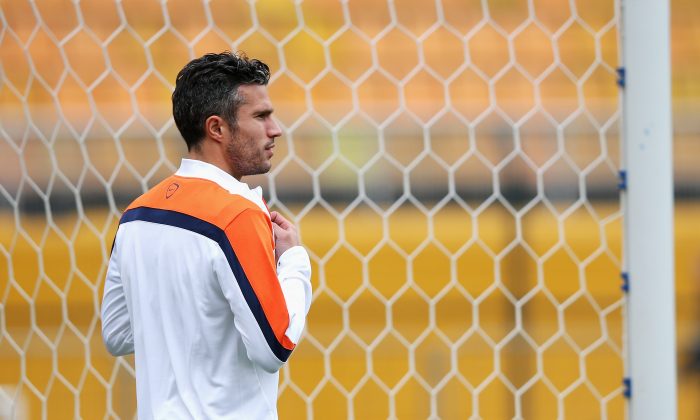 The 30-year-old Dutchman suffered from stomach problems on Tuesday, and was initially doubtful to start against Argentina on Wednesday.

According to ESPN FC, however, coach Louis van Gaal said today that “he expects Robin van Persie to play.”

After scoring 3 goals in the first two games of the competition, Van Persie’s form has dropped gradually each match, and he will certainly be looking to rediscover his scoring boots against Argentina, and set the Netherlands up for a classic final against Germany.

Van Persie Has Stomach Complaint Ahead of Semi

SAO PAULO (AP) — Dutch captain and all-time top scorer Robin van Persie is in doubt for the World Cup semifinal against Argentina after succumbing to a stomach problem.

Van Gaal said he would not rush into deciding whether Van Persie is fit to play at Sao Paulo’s Itaquerao Stadium against the Lionel Messi-led Argentina.

“I have to make a decision tomorrow. I’m not going to do that today. We have more than a day,” Van Gaal said. “Van Persie is a very important player for us.”

Van Persie scored three times in the first two Dutch matches of the World Cup, including a spectacular diving header against defending champion Spain that was instantly hailed as one of the goals of the tournament.

But the Manchester United striker has struggled to hit the same rich vein of form since being suspended for the Netherlands’ last Group B match after picking up two yellow cards.

Against Argentina, the prolific striker is looking to break a remarkable drought for a player of his caliber — he has never scored in the knockout stage of a major tournament.

In potential good news for the Dutch, midfield enforcer Nigel de Jong trained Tuesday and could play against Argentina, depending on how he feels Wednesday.

There were fears De Jong’s World Cup was over when he limped off early in the first half of the second-round match against Mexico and tests confirmed the day after the come-from-behind 2-1 victory that he had torn a groin muscle. The team said he was likely out for two to four weeks, but De Jong battled back.

Van Gaal said the AC Milan midfielder would be checked Wednesday for possible adverse reactions to his training session, “and if they are such that he can play then a miracle will have happened.”

Center back Ron Vlaar also returned to full training after injuring his knee in the penalty shootout victory over Costa Rica in the quarterfinals.

Van Gaal said he has developed a plan to beat Argentina in a semifinal that is a rematch of the 1978 World Cup final the Dutch lost 3-1 in extra time.

But the master tactician, who has just two more matches in charge of the Netherlands before joining Manchester United after the World Cup, said it could change on Wednesday depending on how the Argentinians play.

If the Dutch beat Argentina, they face Germany — the country that beat the Netherlands in the 1974 final — in the championship match at Rio’s Maracana Stadium after the Germans humiliated Brazil 7-1 in the first semifinal.

Van Gaal has been nothing if not flexible with his tactical formations and substitutions at this World Cup. He has switched between a defensive 5-3-2 system and traditional Dutch attacking 4-3-3 formation, moved striker Dirk Kuyt to his defense and, most remarkably, substituted in bigger goalkeeper Tim Krul for Jasper Cillessen a minute before the end of extra time against Costa Rica because he figured Krul was a better penalty stopper.

So far, all Van Gaal’s changes have worked out.

Despite Krul’s shootout heroics — he dived the right way for every Costa Rica penalty and stopped two of them — Cillessen will again start for the Dutch, Van Gaal said.

Van Gaal said the match was too close to call.

“I don’t think there’s a favorite,” he said. “In the semifinals, the teams are each other’s equals.”

And while Van Gaal said the Dutch were playing the entire Argentine team, he acknowledged they will have to find a way to stop Messi.

“If you score so many goals, you have something extra. And he always shows it on the biggest stages,” Van Gaal said. But he added, “he has sometimes had problems for the national team. He wants to change that and we want to make sure he doesn’t.”