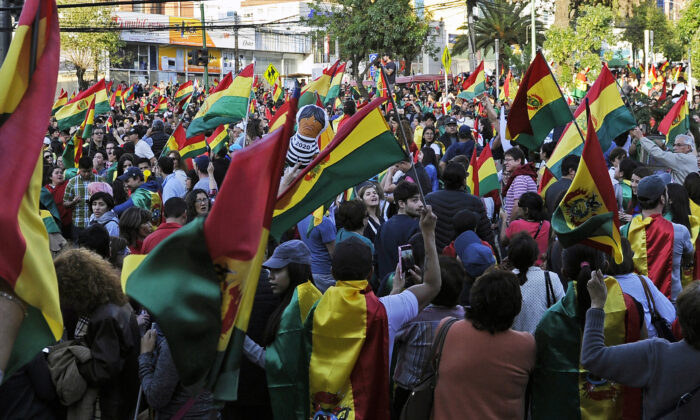 SANTA CRUZ, Bolivia—On Jan. 19, the administration of socialist President Luis Arce canceled the requirement of proof of vaccination against the CCP (Chinese Communist Party) virus to enter any public establishment or place of commerce.

The announcement was made by Minister of Health Jeyson Auza.

Gutierrez said people who opposed the vaccine mandates were citing article 44 of the nation’s constitution, which protects against scientific or medical experimentation without consent, as grounds for the dismissal of the decrees.

On Jan. 17, protesters established road blockades leading from the city of El Alto into the capital La Paz. Rudy Callisaya, head of the rural magisterium in La Paz, said the roadblocks would stay in place in 20 provinces in La Paz Department until the government agreed to dismiss the vaccine decrees. The roads that Callisaya pledged to impede with other protesters are a vital part of the supply chain allowing food and essential goods to arrive in La Paz.

The city draws the majority of its goods from the vast Bolivian countryside.

Solidarity protests held against the decrees in Cochabamba on Jan. 18 were met with an aggressive police response. Opposition to the vaccine mandates led to the establishment of road blockades at key points along Petrolera Avenue and other areas in the southern part of the city. Police arrived in the afternoon and removed the blocks while firing tear gas at the unarmed dissenters.

Later that evening, the demonstrators returned in larger numbers and rebuilt the road barriers.

On Jan. 19, after 48 hours of an intense stand-off with civilians opposed to the mandates, the government agreed to cancel the orders requiring proof of vaccination. Auza said the government made the decision in order “to preserve the safety of the population against certain groups who don’t accept vaccination.”

He also said the purpose of the mandates had already “fulfilled its objective,” with more than 1 million doses of COVID-19 vaccines being distributed since the beginning of a significant case spike that began in December 2021 and peaked on Jan. 10.

The virus has killed 20,291 people in Bolivia since January 2020, and the nation has administered more than 11 million doses of preventive vaccines.

More than 43 percent of the population is fully vaccinated, which is low compared to neighboring countries such as Chile and Peru. They boast immunization rates of 88 percent and 69 percent respectively.

National Director of Epidemiology at the Bolivian Ministry of Health Freddy Armijo announced the detection of the new Omicron coronavirus variant in La Paz on Jan. 7.