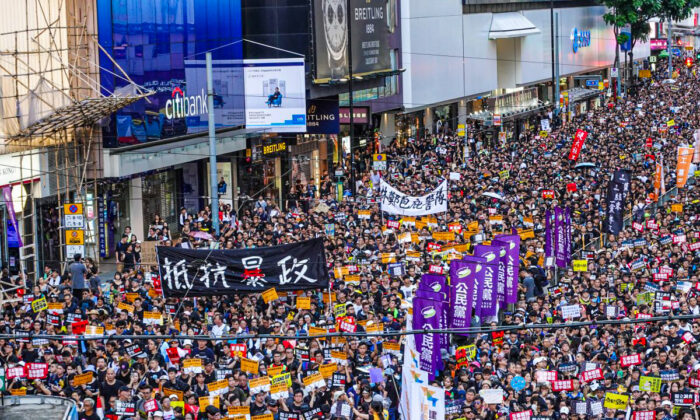 Scholars have countered: 'So what should we talk about then? Dictatorship?'
By Nie Law

Rita Fan Tsui Lai-tai, a member of the CCP’s rubber-stamp legislature, looked back on the past 25-years since the handover of Hong Kong to China, and said with affirmation, “The last 25 years have taught us an invaluable lesson. It teaches all Hongkongers to not talk about democracy and human rights ever again.”

With that being said, scholars rushed to counter-argue Fan’s lesson theory: “If we don’t talk about democracy, what should we talk about then? Dictatorship?”

Zhao Ziyang, former vice-chairman of the  Chinese Communist Party (CCP), once said it was a given that Hong Kong should be governed with democracy.

During her interview with Hong Kong Commercial Radio, Fan spoke of her belief that the basic rights Hongkongers wish to have are reciprocal rewards for the jobs they do, and that they can expect to live a stable life with the possibly of a bit of gain. She continued, “If we can’t even achieve that, it is useless to talk about democracy.”

“Different organizations had been giving the Hong Kong government pressure and demanding open-source governance, also known as open politics in the 1970s. Then in the 1980s, when sovereignty returned to China, there was only one demand—for democracy to return to the people of Hong Kong. Beijing did not object to the demand back then. The former premier of the Chinese Communist Party, Zhao Ziyang, even showed his support to democratic governance by sending personal notes to two of the university student councils here in Hong Kong.”

Chung thought Fan was only twisting the facts to fit the current political environment.

According to records documented in May 1984, Zhao expressed his stance in a letter responding to the student council at the University of Hong Kong.

In his note, Zhao wrote, “ The execution of democratized political systems of Hong Kong, which some of you may call democracy governance for Hong Kong, should be realized.”

Rita Fan: Universal suffrage will only happen when people have “a change of heart.”

Wong Wai-kwok, former assistant professor at the Department of Politics and International Relations at the Baptist University of Hong Kong, pointed out, that no one should apply common sense or logic in an attempt to understand whatever the pro-Beijing parties say, because they are full of twisted facts and propaganda.

Professor Wong believed that the demands of democracy and human rights are the basic rights any functioning government should give to its people. People should not need to be begging for them.

“If we don’t talk about democracy and human rights, what else is there to talk about? Dictatorship?” Wong continued, that the biggest issues in Hong Kong for the past 25 years have been public policies and the landslide of governing power to the capitalists and  CCP-worshiping figures. Hongkongers can’t have stable or plentiful lives. Same with mainland China, as long as the power remains among a certain group of people, they will only care about their interests, not their people’s.”

In terms of the political system, pro-government politician Rita Fan openly terrorized the Hong Kong public, “Universal suffrage will only happen, when and if people have “a change of heart,” which means only when most Hongkongers identify and embrace themselves as Chinese nationals, and will not do anything detrimental against the country or Hong Kong.”

Professor Wong argued that the Basic Law had appointed the chief executive of Hong Kong and the Legislative Council who would eventually achieve universal suffrage. Nominations, candidacy, and voting should have zero elements or influence of political censorship.

However, Fan’s muddling of “one man, one vote” with national development will only make one impression on the public: an excuse to break promises.

Fan also accused the pro-democracy parties of “not listening to opinions” after the Aug 31, 2014 (831) Decision was made by the CCP’s rubber-stamp legislature in 2014.

The 831 Decision is the framework for the decision on the issues of universal suffrage for Hong Kong’s Chief Executive and the formation details of the Legislative Council.

Fan also mocked the pan-dem members, that they “had overestimated” themselves and their abilities, while completely ignoring the wisdom and power of China and wound democracy back to almost eight years prior. Fan also claimed, that there is plenty of room within the 831 Framework for gradual democratization.

This is not the first time that Rita Fan criticized the democrats for rejecting The 831 Decision. In 2017, Fan claimed that The 831 Decision would allow expansions of the voters’ foundation in the elections for the Hong Kong Chief Executive; Democrats were way out of their political league when they fought against the decision and wished for the central government’s withdrawal of the 831 Framework.

The 831 decided not to implement citizen or political party nominations. The CCP authority also stipulated the number and structure of the nomination committee; any candidate for the chief executive election must be supported by more than half of the nominating members, to become an official candidate to run their campaigns. The 831 Decision also limited the number of candidates to two or three persons.

On Sept. 26, 2014, Hong Kong citizens, along with secondary and university student organizations launched a series of civil disobedience campaigns to fight for universal suffrage in Hong Kong for the following 79 days.

Protesters spontaneously occupied major roads and highways for sit-ins and marches. Their primary demands were the withdrawal of the 831 Decision, the rights for civil nominations in chief executive elections, and the abolition of the functional constituency for the Legislative Council.

In the interview, Rita Fan fired shots at the city’s education system and Hong Kong youth, arguing that young Hongkongers had been misled due to the lack of national education, and it was proven by their participation in the 2019 anti-extradition movement and the yearly June 4 Vigil and Assembly, which are both anti-CCP and anti-government.

With no evidence, Fan seemed certain that these protesting organizations had received funds through agencies under the U.S. Congress.  Fan continued her allegations, that many young teachers were “influenced by foreign powers,” and thought what they wanted was democracy. The teachers had an idea that the Communist Party was a one-party regime or dictatorship. Fan guessed that the youth in Hong Kong had been deprived of opportunities in understanding China. This resulted in students blindly following and longing for the western culture in the past 25 years, and had zero appreciation of their own motherland.

Hans Yeung Wing-yu, former manager of the Department of Development at Hong Kong Examinations and Assessment Authority (HKEAA) and a secondary school educator, retorted that, except traditional imperial examinations, all other 20th-century philosophy and education systems are foreign or western.

“Unless Fan wants to resume the imperial examination system in Hong Kong, it is completely meaningless to point fingers at the Hong Kong education system and educators, while accusing them of being influenced by foreign powers.” Yeung concluded.

Yeung believed that Hong Kong education must be a mix of both east and west. For so long, the Hong Kong education had never had any prejudice against the perception of China. Yeung questioned whether both Fan and the pro-government parties wanted to abolish the current education system, which is fact-based and prejudice-free in Hong Kong, and force-feed the government’s version of “education” to students instead.

“If foreign powers becomes the scapegoat to cut back on western elements in education, Hong Kong students will never become global citizens of the 21st century.” Yeung warned.

“The CCP’s one-party dictatorship caused corruption and especially the tragic June 4, Tiananmen Square Massacre. These are all undeniable historic facts.” Yeung added that a democratic system is beneficial to eliminating social conflicts.

Hans Yeung challenged Fan’s theory, “Without democracy, the Communist Party’s propaganda of “serving the people” is only a deceptive slogan. Before the founding of the People’s Republic of China, the Communist Party also used “democracy” to lure intellectuals. So is Ms Rita Fan Tsui Lai-tai insinuating Mao Zedong and others had deceived the people of China using democracy?”