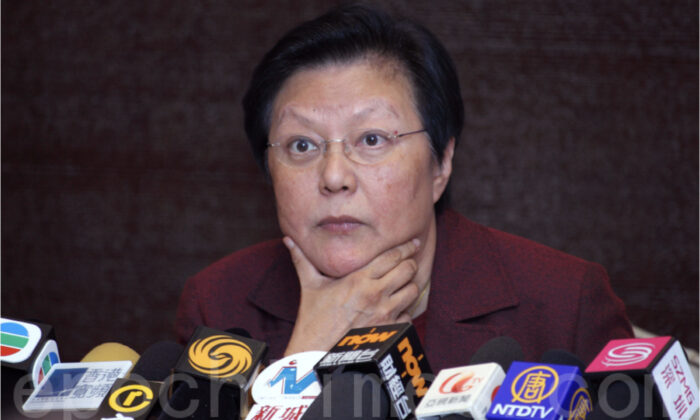 Rita Fan Hsu Lai-tai is a senior Hong Kong politician, she was the first president of the Hong Kong Legislative Council from 1998 to 2008 and a member of the Standing Committee of the National People's Congress of the CCP. (Adrian Yu/The Epoch Times)
Hong Kong

Rita Fan Embarrasses the Communists Over the Textbook Issue

Hong Kong has never been a colony, as claimed by all the four Citizenship and Social Development (CSD) textbooks submitted for approval, is a blatant distortion of history, on which I have been interviewed by five media up to now. Since there are no alternative voices left under the National Security Law, we no longer have any professional bodies like the defunct Hong Kong Professional Teachers’ Union to question the government on this matter. Hence the pro-establishment people who now feel safe to elaborate this false history, such as legislator Priscilla Leung Mei-fun, who said in a Legislative Council meeting that “China never lost the sovereignty of Hong Kong.” She probably does not know about Deng Xiaoping’s 1982 policy on Hong Kong, that is, “return of sovereignty, long-lasting prosperity, [Hong Kong’s] system remaining unchanged, and Hong Kong people ruling Hong Kong.”

Among the commentaries made by the pro-establishment people, the one by Rita Fan Hsu Lai-tai is exceptional—not that it is more ethical and less distorting, but it conveys messages not seen in other comments.

First, it unambiguously tells why history needs to be rewritten. The “media hype” about the new textbooks claiming Hong Kong has never been a colony, she said, aims at promoting a political narrative that “Hong Kong had been a colony, hence it’s right to seek self-determination and independence,” with a purpose to sow the seeds of unrest in Hong Kong. In other words, Rita Fan told us about the regime’s fears that Hong Kong’s ex-colonial status would remind students of the possibility of Hong Kong going independent. Thus, history needs to be rewritten.

Second, if we assume that the communists are rational, such a fear should have a reason. Theoretically, the Sino-British Joint Declaration, Basic Law and China Constitution should have clearly defined the constitutional status of Hong Kong and leave the communists worry free. Such a fear may reflect a deeper worry that even given all the current constitutional definitions, the communists seem to be deeply concerned that Hong Kong’s ex-colonial status will renew controversies and make its current political status undetermined. Moreover, when Russia is no longer required to return the vast Chinese soil in the northeast—Vladivostok included—that was ceded to it through unequal treaties during the Qing rule, the communists are now less confident that the concept of “unequal treaty” suffices to make Hong Kong’s historical narrative unquestionable. They need additional safety. With this comes the ‘murder’ of Hong Kong’s ex-colonial status.

Third, the following is the most interesting part of the interview. Fan said, ‘It is a pity that no foreign press has come to me for that. If I were interviewed by any of them, I would ask them to look up what happened at the United Nations in 1972.”

So what happened then? There were two noteworthy issues surrounding Hong Kong. First, in accordance with the PRC’s request, Hong Kong and Macao were removed from the list of non-self-governing territories so as to remove the possibility that they would become independent. However, this did not change their political status and relationship with their master countries at the time.

Second, and the most important, is about the letter from Huang Hua, the PRC representative to the U.N. The following is the key sentence, ‘The settlement of the questions of Hong Kong and Macau is entirely within China’s sovereign right and does not at all fall under the ordinary category of “colonial territories.” So, “… does not … fall under the ordinary category of colonial territories,” certainly does not mean “does not … fall under the category of colonial territories.” Such phrasing, though diplomatic, actually recognises Hong Kong’s colonial status. In other words, back in 1972 the communists were not bold enough, like they would be now, to blatantly reject the colonial status. It was not until China has risen as a great power (daguo jueqi) that China is no longer satisfied with diplomatic language, and history rewriting is engaged.

The above observation deserves further consideration. As an ex-president of Hong Kong’s Legislative Council, Rita Fan should know how a single word can change the meaning of a law. Doesn’t she know that her invitation to foreign press to investigate what happened in the U.N. in 1972 may lead to the facts being unveiled and embarrass the Hong Kong establishment and even the PRC? Has she gone through the documents? If she has, did she miss the gist or distort the message? If she has not, is her observation based on second-hand sources? And, is this common in the pro-establishment camp?

The efforts of tampering with history will be spoiled if one can have access to the archival originals. Probably the communists need to create the first ever diplomatic document that literally rejects Hong Kong’s colonial status, for example, by deleting the word ‘ordinary’ in Huang Hua’s 1972 letter.