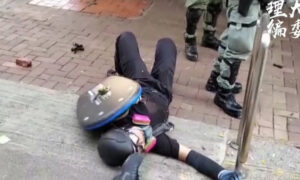 It marked a dramatic escalation in violence when an 18-year-old protester was shot by gunfire in the chest by a Hong Kong police officer on Oct. 1.

Nonetheless, reporters, photographers, and videographers from Epoch Times are determined to stay at the frontlines of the protests to deliver first-hand information to readers in Hong Kong and around the world.

In the past few months of protests, Epoch Times reporters have reported on all major rallies, parades, and events held by anti-extradition-bill protesters. They have also interviewed countless local officials, protesters, and other ordinary Hongkongers about their views on the current crisis affecting their city.

While reporting, they sometimes get in the line of fire as police fire tear gas, pepper spray, and projectiles.

“I’m not scared. It might be dangerous but not compared to what the protesters are facing every day. I have the option to go back to a democratic country, but Hongkongers don’t have anywhere to go, and they are standing up for what they think is right,” said Jeremy Sandberg, a reporter from Epoch Media Group.

Hongkongers began to organize rallies in April against the controversial extradition bill that would allow the Chinese regime to transfer anyone from Hong Kong to face trial in Communist Party-controlled courts. Since then, reporters from Epoch Times have live-broadcasted major events, without fail.

On Aug. 11, Ou, a reporter for the Chinese-language NTD, livestreamed the protests at the North Point neighborhood, known to be a haven for many pro-Beijing mafia. NTD is a sister media of this publication under the Epoch Media Group.

That evening, as Ou reported on a group of people who claimed to be pro-police, some in the crowd suddenly threw some sticky liquid at her face and hands. Some of the liquid entered her mouth.

When Ou turned her camera toward the pro-police crowd on the footbridge, a man tried to trip her by extending his foot in front of Ou.

On Sept. 15, Rachel Wong, a reporter with the Hong Kong bureau of the Chinese-language Epoch Times, live-streamed protests at North Point. In the evening, when police dispersed protesters, a man dressed in a white T-shirt attacked her and knocked her camera to the ground.

Several police officers were nearby and witnessed the scene but did not detain the attacker.

Protesters have expressed their respect and appreciation for Epoch Times’ tireless reporting.

On Sept. 8, Sandberg and Shenghua Sung, an NTD videographer, were surrounded by hundreds of protesters. Police were ahead of the parade route, so they had difficulty getting to the front of the demonstration. When the protesters realized they had to get in front, they made way for them.

The protesters applauded as the reporters walked past.

During these months, The Epoch Times also received positive feedback continually from Hongkongers by email, phone calls, and mail, in which they thanked the publication for covering the protests.

“As a reporter, reporting the truth is our duty. We must keep on reporting because society needs the truth,” Wong said.

On the evening of Aug. 31, Wong couldn’t control herself and cried in front of the camera when she did the live broadcast. She shot the whole process and said: “A young protester fell down to the ground in front of me, but I couldn’t help him up. He told me that he was shot by police [with a projectile] in his stomach.”

Our reporters said they were encouraged by Hongkongers.

“I feel Hong Kong is standing up to the Chinese Communist Party against all odds, I admire their determination to stand up for their freedom and their sense of obligation to protect their rights,” Sandberg said.

Journalists from around the world have descended on Hong Kong to cover the protests, some whom have been seriously injured by police while covering the demonstrations.

On Sept. 29, a reporter from a local Indonesian media was shot in the eye by a police projectile and was sent to a local hospital.